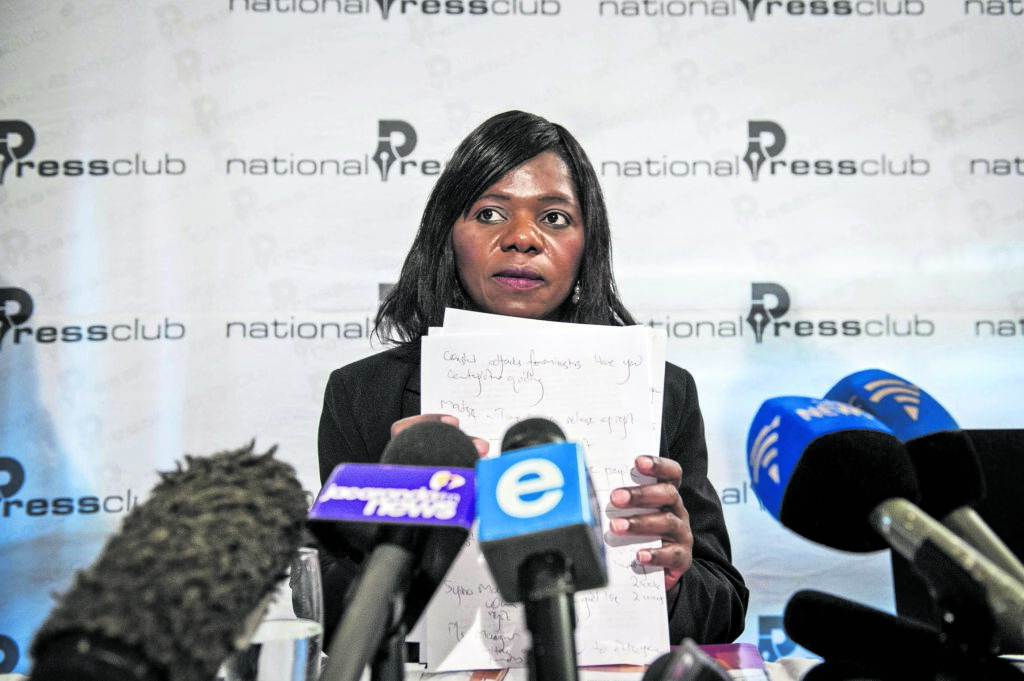 This has been a tough year for South Africa. In this 27th year of our democracy we have come to fully understand that citizens aren’t simply bystanders; they are active participants who are able to use their votes and their voices to change the trajectory of the country.

After the terrible events of July, it was impossible to ignore the fact that ordinary people had been killed because of a set of petty battles over economic and political resources within the ruling party. South Africans woke up to the realisation that they are at the mercy of the group of moral zombies who occupy the ANC.

Those who died in the looting and the mid-year chaos stoked by Zuma-aligned people were casualties of decades of ANC-driven economic neglect. They didn’t die over big ideas and revolutionary acts. They died because they were desperate for groceries and goods they might never otherwise have afforded.

So, in a year in which there has been little to celebrate, the ANC’s decline at the polls in local elections has provided some good news by demonstrating that the party can no longer count on the loyalty of those in the electorate whom it has abused for so long. Those who voted (and it is true that there were many who simply stayed away out of frustration) gave a clear message that they had had enough.

Their actions came on the heels of a larger shift in public debate. Whereas in the past, the media has been seen as a powerful champion of people’s rights to know what politicians are doing with their money, this year, we saw ordinary public servants and corporate employees stand up at great risk to themselves to expose the rot of leaders in business and government.

In this way, 2021 can be seen as the year of the whistleblower. The media remains a vital part of our democratic landscape, and indeed works hand-in-glove with whistleblowers, but the fact is that this year, a great many individuals stood up and spoke out; bearing witness in powerful and largely unsung ways. Their place in keeping the lights on in our constitutional democracy has been invaluable.

They will need protection and support if others are to be encouraged, but perhaps it is worth discussing the importance of normalising their acts, so that we do not fall into the trap of making heroes – and perhaps martyrs – out of them. South Africans have learned over the years that all public figures are fallible. We have learned that it is important to encourage a culture of debate, contestation and robust respect, but that it is as dangerous to hold up certain figures as saviours as it is to vilify others.

South Africans are far more circumspect about embracing personalities today than we were two decades ago. This is a healthy development. It means we can invest in creating the conditions for thousands of whistleblowers to emerge, rather than having to rely on a small band of courageous and highly vulnerable people to “save” our democracy. As the poet June Jordan so poignantly put it, “We are the ones we have been waiting for.”

It has been a long road to understanding this basic principle. In the mid-1990s there was a strong feeling that the ANC had an abundance of ethical leaders would guide South Africa away from the moral rot of apartheid and into a new democratic era. Politicians and public servants weren’t very different in the eye of the public — they all came from the ranks of the liberation movements that had been crucial to overthrowing white minority rule. At the time we did not fully understand that this would make it difficult for comrades to hold one another accountable. Many of this first generation of leaders blurred the lines between old allegiances to one another and a far newer loyalty to the Constitution.

By the mid-2000s it seemed that the struggle between public servants and politicians had largely been lost. Jacob Zuma’s faction of the ANC had a stranglehold on power, and more importantly the entire party was beholden to some form or another of patronage. Every level of state power was infected by the ANC’s corruption virus.

The newspapers were full of stories about stolen millions and rightly so. Journalists were heralded for piecing together complicated relationships between comrades and their spouses and money from various private and state entities.

With each breaking story the media was vilified by those in power and praised by those in organised civil society. These wars over the role and scope of the media were bruising and we continue to feel their effects today.

When Thuli Madonsela stepped into her role as public protector, she answered the nation’s need for a hero. For all her strengths – and there were many – Madonsela wasn’t a hero. In fact she seemed uncomfortable with that mantle. She was a hard-working public servant whose efforts were deserving of our respect, admiration and yes, scrutiny.

Madonsela’s most dramatic contribution to the political landscape (and there were many) took the form of her final report. In the dying days of her term of office she managed to insert a term into the public domain that has taken a life of its own: state capture. The phrase that had previously been used in academia was included in her final report, which was called State of Capture.

The report ran to 355 pages and detailed the relationship between the Guptas and then-President Jacob Zuma and his family and their attempts to develop a governance model based on self-dealing. Madonsela illustrated their campaign to drain state coffers and subvert political and bureaucratic decision-making.

It was a scandalous tale that implicated ministers and heads of state-owned enterprise and explained the inner workings of a former liberation hero who had lost his way, and his comrades who had enabled his conduct through a combination of malice, cowardice and greed.

One of Madonsela’s recommendations was that the president should assemble a commission of inquiry into state capture. We continue to reap the rewards of that recommendation. Although there were hiccups in the beginning, after Zuma’s resignation, the deputy chief justice was given the administrative and technical support required to operate.

By last year the commission was up and running and of course this year it took off. The process was not without its problems. There is a risk that people called up to respond in public were tainted unnecessarily and so perhaps more sessions should have been held out of public view. Still, there is no denying the commission’s overall public benefit. It isn’t a stretch to suggest that the revelations made at the commission played a role in the outcomes of the local government elections in November.

By far the biggest stars of the show, indeed those who shone brightest and contributed most deeply to understanding the corruption and wrongdoing that threatens to hollow out our democracy, were the lawyers who pushed politicians to answer questions they would have preferred to avoid, and the whistleblowers who came forward – many of them at great cost to themselves – to bear witness. The lawyers were outstanding, but they were executing their duties for a fee. This doesn’t diminish their efforts, but it is another thing entirely to withstand scrutiny simply because you believe it is the right thing to do.

Those who blew the whistle provided an invaluable service to the public. They helped us all to better understand the contours of state capture, fleshing out crucial details. Who can forget the camera footage provided by Angelo Agrizzi and the allegations he made against senior government figures including Nomvula Mokonyane, who inexplicably remains a member of Cyril Ramaphosa’s cabinet? It bears saying here that her continued participation in cabinet will deter others from stepping forward. We will not soon forget Athol Williams and his implication of Bain Consulting and former South African Revenue Service head Tom Moyane in corruption.

There were of course many others who will not be named in the final Zondo report because they wish to remain anonymous. Still the documents they leaked and the evidence they provided will form the basis of how South Africa moves forward once the report is released at the end of this year.

To be sure, having worked within structures that have committed wrongdoings for years some whistleblowers are imperfect witnesses. They can be accused of having agendas, of covering up their own tracks, of seeking redemption after years of having benefited from systems and processes that were patently wrong. What matters of course is that each act of disclosure (tested and subjected to appropriate scrutiny) promotes accountability and makes it harder for corporate and government leaders to commit further breaches.

It occurs to me that whistleblowers might be the perfect foil for the political and economic elite whom they have exposed this year. As South Africans take back their power, it is obvious they are sick of politicians. It is fitting then that the people who helped to shine the spotlight on state capture aren’t other politicians or even journalists who are increasingly seen with suspicion.

Instead, whistleblowers are motley crew, a rabble of people connected by nothing more than individual acts of conscience. They do not belong to a particular political party or a single large organisation. Indeed, if 2021 has taught us anything it is that those who bear witness are a more powerful force than any single political entity.

Whilst expressing our respect for their courage we must resist the urge to hold whistleblowers up as saviours; we are too far into our democratic journey to romanticise anyone. Instead, we must build a culture that normalises bearing witness in its most profound sense – not as bystanders but as those called upon to speak. We must put in place a more robust policy environment to support those who choose to disclose secrets in the public interest. Our country no longer needs martyrs, that era is past. We want our whistleblowers like we want our democracy: alive and kicking.