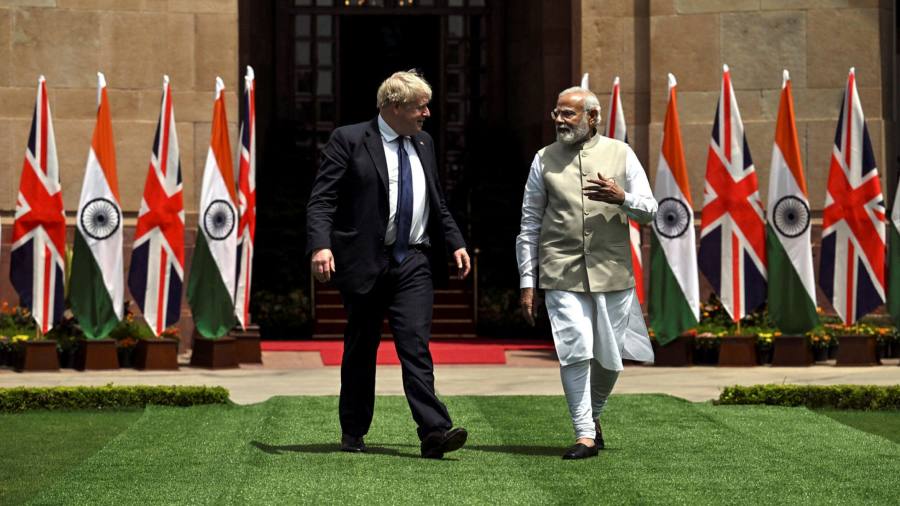 Boris Johnson has ordered British negotiators to push for a trade deal with India “by Diwali in October”, but he steered clear of the vexed issue of Ukraine after talks with his counterpart Narendra Modi in New Delhi.

Johnson, dogged by political problems at home, hopes that talk of more trade and greater co-operation with the world’s biggest democracy will show he is focused on the bigger picture.

He called Modi “khaas dost”, or “special friend”, and did not risk jeopardising that relationship by openly criticising India for failing to condemn Russia’s invasion of Ukraine.

In a public statement after talks with Modi in the Indian capital, Johnson only alluded to the conflict without mentioning Russia, saying that “threats of autocratic coercion have grown even greater”.

Modi repeated his call for an immediate ceasefire and said “diplomacy and dialogue” were needed but India’s position is complicated by its close ties to Moscow and reliance on Russian military hardware.

The Times of India revealed that Number 10 had insisted that Johnson travel on a US-made Chinook helicopter rather than the Russian Mi-17 offered by New Delhi, but otherwise the paper said Ukraine only cast a “faint and fleeting shadow” over the visit.

Harsh Vardhan Shringla, India’s foreign secretary, told journalists that on Ukraine Johnson and Modi had a “useful exchange . . . on convivial terms. Both sides agreed that they had points of view. These were greatly respected.”

Shringla also said that the prime ministers made progress on a number of schemes to increase the flow of students and professionals between the two countries, including plans to let UK universities open branches in India.

At the end of Johnson’s two-day visit to India, the British prime minister is hopeful that a trade deal can be struck quickly, with the aim of boosting UK exports of whisky, cars and professional services.

Modi said he hoped for a trade agreement “by the end of the year”, that “good progress” had already been made and that he wanted India to move with the same “speed and commitment” it had shown in striking recent trade deals with Australia and the United Arab Emirates.

But the deal will be complicated and will force Johnson to make difficult choices, including opening up Britain to more Indian workers.

Modi referred to the “living bridge” between the two countries — around 1.6mn people of Indian origin live in the UK — and he hinted that he wanted to see an even greater exchange of people.

“We would like to see a further strengthening of this living bridge,” he said. India also wants greater access to Britain for its professional services, along with exports of rice and textiles.

Johnson has opened the door to more visas being issued to Indians during the trip, saying that the UK was short of “hundreds of thousands” of skilled workers, particularly in IT and programming.

At their joint appearance at Hyderabad House in New Delhi, both sides spoke of new collaborations on areas such as medicines, defence equipment, vaccines and green energy projects.

Johnson said the “living bridge” was “pullulating” with goods, services, people and capital, but Britain currently conducts twice as much trade with Belgium as it does with India.

However, Johnson sees India as a crucial element of his “tilt to the Indo-Pacific”, part of a post-Brexit foreign policy that seeks to strengthen relations with democracies in the region as a counterweight to China.