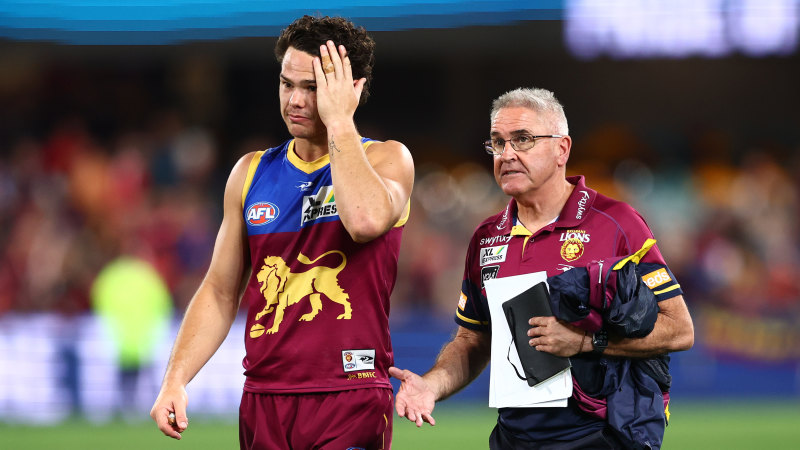 Acting on behalf of Rayner, Adrian Anderson said “objectively” the tackle had to be classed as low impact, adding Brown suffered a blood nose and abrasions on his face, but was able to play out the rest of the match and wasn’t concussed.

In relation to the charge of rough conduct, Woods said the tackle was “unreasonable in the circumstances”.

“The AFL’s position is that it is rough conduct because it was unreasonable in the circumstances to tackle in the way the player did,” Woods said.

“It wasn’t reasonable to tackle with holding Brown’s upper arms the way he [Rayner] did.”

Woods said Brown was brought to the turf with “significant” force.

“In my submission, there was an element of a sling tackle – but if you don’t accept that, it was an excessive rotation,” he told the tribunal.

Woods said the potential to cause injury “was prevalent here”.

Rayner, who had never previously been suspended, either in the AFL or in junior football, said he tried to grab Brown’s arms to stop him disposing of the ball – “as we’re taught to do to tackle”.

Anderson said of the footage of the tackle shown during the hearing: “we can see that both of Ben Brown’s hands, or forearms, are on the ground.”

He said the tackle wasn’t a sling tackle.

The Lions finished sixth on the ladder but stumbled into the finals off the back of three wins from their past five matches – leading to them slipping from the top four and a double chance.

The Lions last faced Richmond in round 20, when the Tigers – who were dominated in the first half – came from six goals down at the main break to win by seven points at the MCG. The Lions won their last finals encounter, a qualifying final at the Gabba in 2020, but Richmond went on to win the premiership that year.

Brisbane and Richmond face off again on Thursday, September 1.