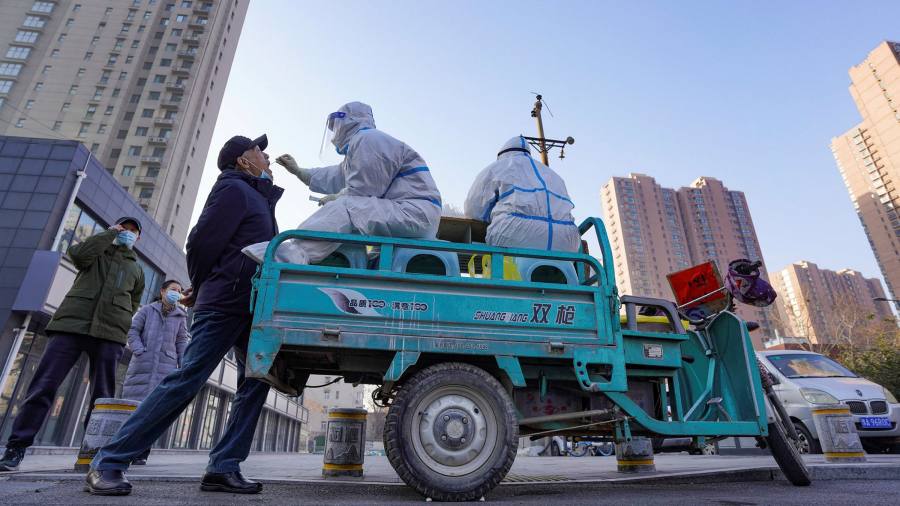 Li Huixiang, a property broker in the central Chinese city of Zhengzhou, had been looking forward to a bumper March. In an effort to boost the city’s flagging property sector and the local economy along with it, municipal officials unveiled an array of incentives, including lower mortgage rates and cash subsidies for new home buyers.

But Li, normally a star agent at one of the largest residential developments in Zhengzhou, has sold only five apartments at Sunac City since the measures were announced — a fraction of his normal sales volume.

Compared with the same period last year, new home sales in Zhengzhou fell more than 30 per cent in the six weeks from March 1 to mid-April, mirroring a nationwide trend.

The city, the provincial capital of Henan province and just 2.5 hours south of Beijing by high speed rail, requires all arrivals to quarantine for three days. Li and other brokers said the flow of property buyers from other cities or provinces, who used to account for more than half of their sales, had come to a halt.

“There is a conflict between boosting housing sales and following Covid-prevention rules,” said Li.

There have also been disruptions within Zhengzhou, which is home to 12.6mn people and recently sealed off a large area where its airport and big factories supplying Apple are located.

Authorities also contacted people whose mobile phone records indicated that they had visited the area before its lockdown, asking them to quarantine for seven days.

The Xi administration has made it clear that, the hardship of people in Shanghai and other lockdown-affected cities notwithstanding, Covid containment will remain its top priority. Shanghai’s lockdown was initially intended to be partial and last for no more than 10 days, but has been extended indefinitely.

On Monday the National Bureau of Statistics said housing construction starts had fallen 20 per cent in the first quarter, compared with the same period last year, even though at least 60 other cities have implemented property support measures similar to Zhengzhou’s.

While the NBS estimated that first-quarter economic output expanded at a stronger than expected 4.8 per cent, March data pointed to the beginning of a significant downturn as Shanghai and dozens of other cities began to enforce lockdowns to contain virus outbreaks and uphold President Xi Jinping’s contentious “zero-Covid” policy.

The strictest lockdowns have been concentrated in the Yangtze river delta around Shanghai, gumming up logistics in one of the country’s most important manufacturing and export regions, but Zhengzhou has been affected too.

China’s central bank has had three opportunities to cut various interest rates since April 15, but chose to leave all three rates unchanged. Its only nod to policy easing this month has been a smaller than expected, 25 basis-point cut in banks’ reserve requirement ratio.

One Beijing-based government policy adviser, who asked not to be named, said that even before Covid lockdowns began proliferating in March, “the top leadership had underestimated the impact of the real estate meltdown on the broader economy”.

“The situation,” he added, “may get worse before it gets better.”

Zhengzhou’s property stimulus package, one of the most aggressive in the nation, was deemed necessary to rescue the sector from a disastrous 2021. According to official data, new home sales in the city fell by a third last year while land sales, a big source of fiscal revenue, dropped by a quarter.

In addition to Xi’s crackdown on highly leveraged developers, last year Zhengzhou’s economy was also hit by two Covid lockdowns and a severe flood that bankrupted small businesses and contributed to a surge in unemployment.

“[Local governments] have been struggling with increasing expenditure requirements, especially in the social sphere, but a revenue base that has been flat,” said Bert Hofman, head of the National University of Singapore’s East Asian Institute. “They are really squeezed.”

On March 1, Zhengzhou began to roll back measures introduced to curb speculative buying — in keeping with Xi’s mantra that “homes are for living in, not speculation”. Under the looser rules, the down payment ratio for second-home buyers was slashed to 30 per cent from 60 per cent and they could qualify for mortgages priced at 4.9 per cent, compared with 6 per cent previously.

City officials also reduced the time buyers had to wait before they could sell their homes to one year from three years, and offered subsidies to those with university degrees.

“We are doing everything, including allowing a moderate level of speculation, to bring the market back to life,” said a Zhengzhou housing official.

“There is no shortage of rich buyers who understand the value of real estate investment,” said Lucy Wang, a sales agent at a high-end development in Zhengzhou’s northern outskirts. Wang sold 15 apartments, each costing more than Rmb8mn ($1.25mn), after the measures were announced.

Mass market developers, however, are still struggling to attract buyers across the country, even with price cuts or inducements such as free parking spaces. Nationwide, households’ savings increased 17 per cent over the first three months of this year while their new debt, composed mainly of mortgages, fell 46 per cent.

Marketing staff at seven low and medium-priced development projects in Zhengzhou told the Financial Times that they were not meeting their monthly sales targets. The city is littered with dozens of stalled projects abandoned by bankrupt developers.

“People are afraid of entering the market when they are surrounded by unfinished buildings built by distressed developers,” said an official at the Zhengzhou branch of China Merchants Property, a Shenzhen-based group.

One would-be buyer having second doubts is Zhang Jian, a Zhengzhou engineer who last week pulled out of a Rmb1.2mn purchase of a property built by Country Garden, China’s largest real estate group by sales. “I am going to wait for the market to weaken further,” he said.