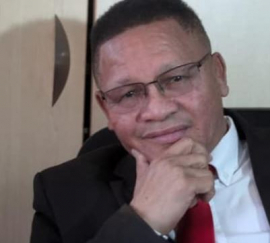 “DJ Fantastic” that’s how locals in the Karoo towns of Ladismith and Zoar refer to Jeffrey Donson, a former mayor of the Kannaland municipality in the Western Cape.

Donson has been hogging headlines lately. Kannaland, as with many other political coalitions, which are inherently prone to instability, hardly stays out of the news. The latest headlines, however, tell us more than about the usual volatility of coalitions. They also inform us about how social mobilisation can trigger change in instances where the law appears mute, and institutions are inefficient.

A long-serving councillor, Donson was voted out of the mayoralty in January 2022. He was elected mayor shortly after the 2021 elections, following his party winning three seats, making it the largest in the seven-seat council.

And, that was not the first time Donson had worn the mayoral chain. The first time was back in 2000 on the ticket of the National People’s Party (NPP). In 2008 he left the council briefly following his expulsion from the NPP.

The resultant by-election of October 2008 saw Donson returning to council, under the banner of a different party, the Independent Civic Organisation of South Africa (Icosa). And, Icosa has remained the largest party with every subsequent election in Kannaland since then, and Donson has repeatedly been elected mayor.

In a place like Kannaland, Donson’s popularity is not entirely surprising. Local politics is fraught with racial tension. This was the reason Donson left his original party, the ANC. Donson, and other coloured leaders like Trueman Prince in Beaufort West, exploited the fact that Kannaland is predominantly coloured. He resented what he thought was an intrusion from the outside especially in instances where provincial leaders reprimanded him for wayward behaviour.

The racial identity of ANC leaders in the Western Cape, both in the party and government, had always been a contentious issue. Coloured people make up the majority in the province, but not so in the ranks of the party. This has meant that provincial party leaders tend to be African, whereas government leaders are coloured.

Besides the party’s embrace of non-racialism it also made practical sense for the ANC to have coloured leaders visible in government to affirm its inclusiveness. But, leaders like Donson exploited their popularity within such predominantly coloured communities to create a fiefdom for themselves, independent of the central control of the party. And, when they didn’t get their way, they simply left the ANC confident that they would still be elected.

Coloured communities are generally unhappy at policies aimed at racial redress — that is affirmative action and black economic empowerment — because they believe they discriminate against them in favour of Africans. As it is the author and proponent of such policies, the ANC has tended to be vulnerable to caricature as the party for Africans.

It is this sense of exclusion that Donson has exploited for votes. He has cast himself as a champion of coloured interests. His staple of politics is coloured nationalism — in the name of coloureds and for the coloured people!

Apart from being a predominantly coloured community, Kannaland is also small and relatively poor. Such communities are susceptible to the “big-man” syndrome. Donson also gained local adoration as the owner of a nightclub where he sometimes filled in as a disc jockey – hence the nickname “DJ Fantastic”.

Providing entertainment adds to his stature and generates him sufficient income. In other words, Donson has always been able to dispense patronage, some of which came from the public purse. Kannaland is full of stories about Donson instructing officials to use municipal funds to help out needy residents that approach him for assistance.

Donson’s popularity has endured despite obvious moral lapses. Following revelations that, at the age of 42 in 2004, he had a sexual relationship with a 15-year-old, Donson was convicted of statutory rape and indecent assault.

This earned him a five-year jail sentence. After he appealed against the sentence, the judge converted it to a non-custodial term. The sentence was suspended, and Donson was fined R20 000 and ordered to attend a rehabilitation programme for sex offenders.

Three weeks later in October 2008, after having his sentence converted,  Donson won a by-election and was re-elected as mayor.

Locals have obviously overlooked Donson’s moral failures. Not only was he re-elected, but there doesn’t seem to have been any outcry against his candidature. That his sentence was converted to a non-custodial term freed him to stand for public office.

Public reaction this time around, however, was different from previous victories. Shortly after his election as mayor, in November 2021, a group of children’s rights organisations complained: “How is it possible that a rapist” can be elected into a position of power. And went on: “Who in their right mind would allow a grown man who started a relationship with a 15-year-old [to become] the mayor of your municipality?!”

The Commissioner for Children, Christina Nomdo, added: “Is talk about commitment to child rights and combating gender-based violence just lip service from those in power? This is not just a news story for those of us in the children’s rights sector, this is a measure of our society, and it is unacceptable!”

Unaccustomed to being challenged or his morals questioned, Donson was not perturbed by the outrage. He vowed to stay on as mayor. The ANC’s Nicolaas Valentyn, who had been elected speaker of the council, fumed at the mere questioning of Donson’s election in a fake self-righteous tone, dismissing the queries as “dissing their duly democratic elected leaders … death journalism shabbily clad in pretended pietistic political purity may be the standard in some tinpot dictatorships but should have no purchase in the South African democracy  bought by the blood of the immediate fathers and mothers and oupas and oumas of ordinary South Africans”.

Ultimately though, Valentyn’s feigned moralistic outrage couldn’t hold. Cyril Ramaphosa,  president of both the country and Valentyn’s party, around the same time as their election, had issued a newsletter rallying the country behind the fight against the abuse of children and women.

Ramaphosa didn’t mince his words: “If a nation’s character can be judged by how it treats women and children” he wrote, “we are falling desperately short”.

Soon thereafter, ANC provincial leaders decided to review their coalition with Icosa in order to affirm the organisation’s commitment to the “fight against all forms of gender-based violence”.

In January 2022 a motion of no confidence against Donson’s mayoralty was tabled and carried with the support from the ANC and the Democratic Alliance.

It is easy to condemn Kannaland voters for electing flawed figures like Donson. For individuals battling to eke out a living, support for such characters can be rationalised. Donson helps people out. It’s not uncommon for desperate people, without any other source of livelihood, to enter into a relationship purely for material gain.

Such relationships are not forged out of choice but are made necessary in order to survive. Laws may not always prevent delinquents from assuming public office, but that doesn’t make their election acceptable. People must still express moral outrage to shame others into action.

Mcebisi Ndletyana is a professor of political science at the University of Johannesburg and co-author of a forthcoming book on the centenary history of Fort Hare University.

The views expressed are those of the author and do not reflect the official policy or position of the Mail & Guardian.