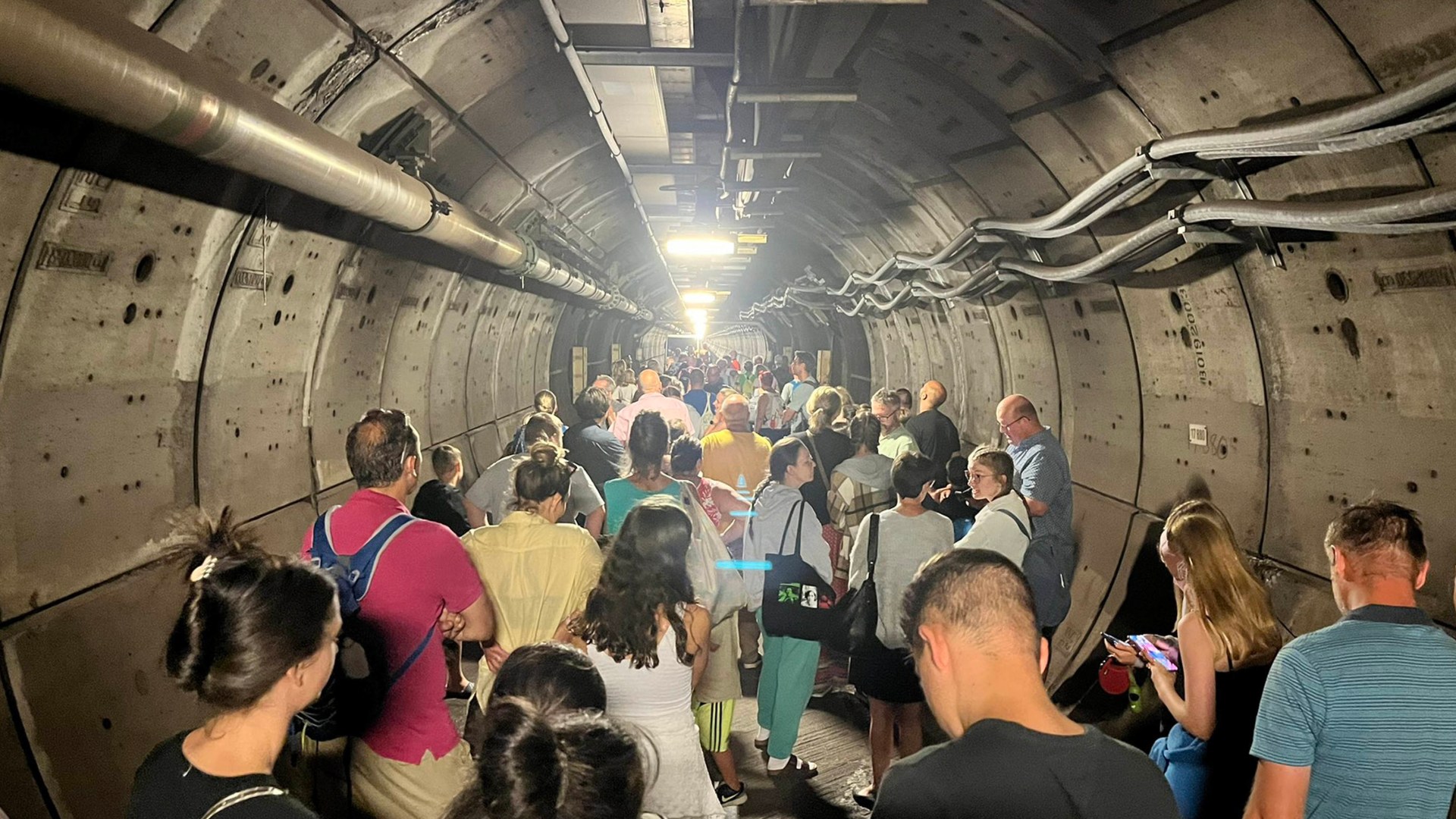 HOLIDAYMAKERS were forced to walk through the Eurotunnel after a train broke down inside – leaving them stuck for almost five hours.

The France-bound travellers had to abandon their vehicles when the car train suddenly broke down about ten minutes into its journey on Tuesday evening.

Everybody was escorted to a passenger shuttle and returned safely to Folkestone in Kent – but only after hours in the underwater tunnel.

People were seen walking down a concrete corridor under the Channel with their belongings.

In one clip, a traveller is seen carrying a baby on their hip and another has brought their dog with them.

Staff in high-vis vests can be seen supervising the exodus.

The breakdown halted the 3.50pm Le Shuttle in its tracks late on Tuesday on the way to France.

Hundreds of holidaymakers were evacuated from their vehicles and rescued through the alternate tunnel running alongside.

Luckily passengers were escorted on foot to a passenger shuttle and not forced to walk the entire 31 miles from Folkestone to Calais – the longest underwater section of any train tunnel in the world.

Some travellers were scared by being trapped below the sea, according to witnesses.

Others were starving and exhausted by the waits, saying the service tunnel was “a bit of a weird place”.

A spokesman for Eurotunnel Le Shuttle said: “A train has broken down in the tunnel and we are in the process of transferring customers to a separate passenger shuttle via the service tunnel, to return to our Folkestone terminal.

“We apologise sincerely for this inconvenience.”

The emergency also caused an enormous backlog at Calais, where drivers were told to stay away from the terminal until 6am on Wednesday.

Michael Harrison, from Cranbrook, Kent, one of those on the evacuated train, said: “We got on the 3.50pm crossing, approximately 10 minutes in the lights went out and the train stopped.

“We were told they needed to investigate an issue with the wheels.

“It took approximately one and a half hours for them to investigate and obviously not find anything.

“They reset things and set off for another five minutes.

“It happened again at which time we waited a further couple of hours to decide they couldn’t see a problem but had to evacuate the train to another train.

“After further waiting we left the train through the emergency link tunnel to the service tunnel.

“We then walked approximately 10 minutes to a train in front of the stricken train.

“This was a bus carriage where we got transported to Folkestone.

“That train then stopped as it couldn’t get traction, presumably as it was long and had no weight on it.

“There were gasps of incredulity when that was announced. We finally arrived in Folkestone six hours after boarding.”

Another passenger said: “Several people were freaking out about being down in the service tunnel, it’s a bit of a weird place.

“We were stuck down there for at least five hours.

“If I’ve got a gripe it’s that they knew several hundred people were arriving at Folkestone who hadn’t eaten for five, six or more hours and there was absolutely nothing for us here.

The terminal disaster follows warnings of an entire summer of travel chaos as the Channel Tunnel crumbles under the pressure of high demand.

The undersea route linking the UK to France was dubbed the “hotspot of holiday hell” when vehicles were backed up bumper to bumper in July.

Holidaymakers were warned the Kent port was on a “knife edge” as the country’s travel mayhem went on.

And a “critical incident” was declared at Dover last month, with holidaymakers told to arrive six hours early for ferry queues lasting up to five hours.

Border checks and French authorities’ understaffing checkpoints were blamed for the hold-ups.