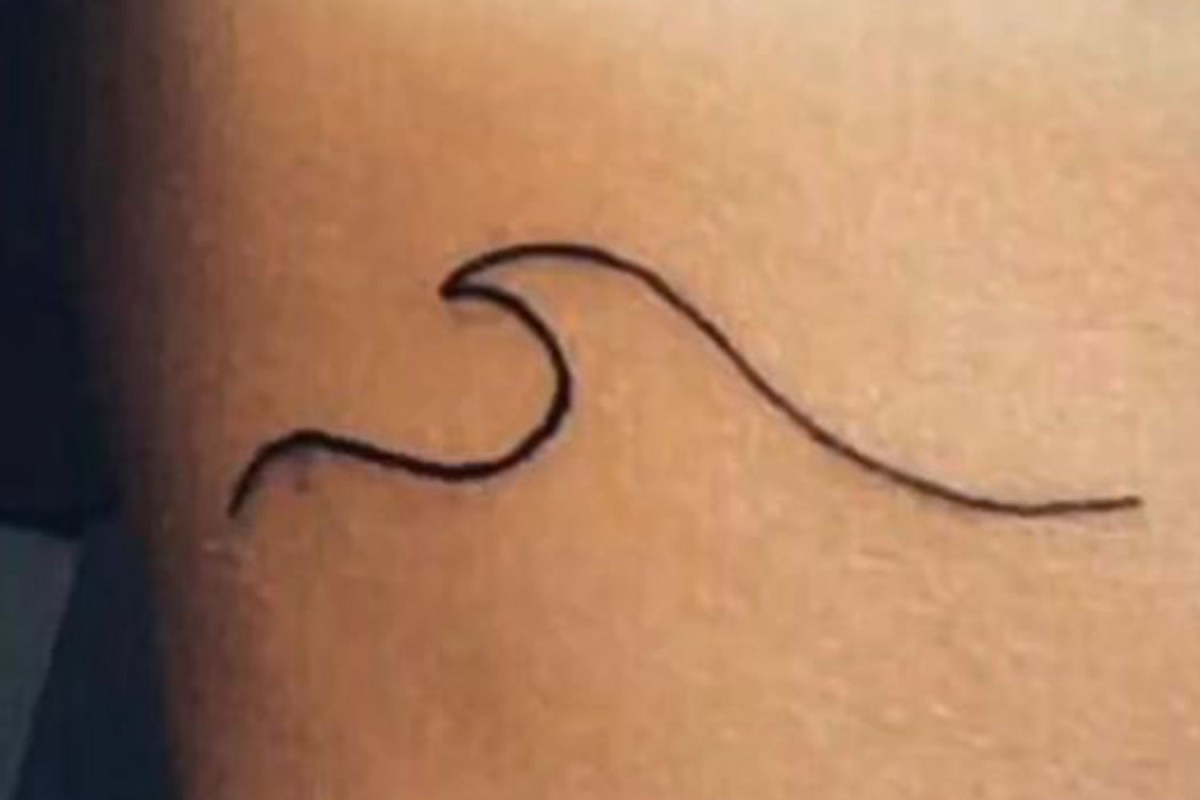 A WOMAN has shared what she hoped her ocean wave tattoo would look like while revealing the unfortunate version she got instead.

Chrissy Rae, 19, from California, posted a montage of the beach-inspired body art she had been expecting to TikTok.

The 10 second clip shows 5 different images under the caption ‘What I asked for’.

The sixth image then reveals how the tattoo turned out and fails to come anywhere near the defined lines seen in preceding pictures.

Chrissy’s tattoo doesn’t pull of the smoothness of the other versions and appears much weaker in colour.

Instead of a tidy, sweeping wave, it appears jagged and resembles more of a sharkfin sticking out of the water than an actual wave.

Chrissy posted the video with the a ‘sad face’ emoji, “lol” and three hashtags including #badtattoo.

The sound mix is titled ‘twisted it up a bit’ by Noah Feldman and is a mash up of two different versions Pink’s hit track Just Give Me A Reason which originally featured Nate Ruess from Fun.

The song was used as part of a trend at the end of 2019 where TikTok users would share the visual evolution of an appearance, commonly a celebrity.

In this instance, Chrissy used the trend backwards to show a downturn from how her tattoo was supposed to look before comparing it with the real thing.

More than 145 people commented on her video with many agreeing that the outcome wasn’t great.

One person wrote: “Ooh that’s rough”, while another said: “it looks like a shark fin”.

Another said: “Go get your money back sis”.

One jokester commented: “CEO of connect the dots”.

It comes as one woman revealed that she wanted to get an inspirational message tattooed on her chest, to constantly remind her of her strength.

But it went terribly wrong when the tattoo artist made a major spelling mistake, leaving her permanently marked with the awkward error.

Jennifer McGee, 18, took to TikTok to share what happened with her botched tattoo.

Another woman got a tattoo as a tribute to her mom but the artist botched it and now no one can work out what it says.

Reddit users have been scratching their heads over the tattoo, which has become almost indecipherable.

And another woman was ridiculed by Reddit after she posted a photo of her tattoo which shows a snake wrapped around a plant that has two flowers coming out of it.

Redditors mercilessly ridiculed the pattern, with some comparing it to fruit peel.