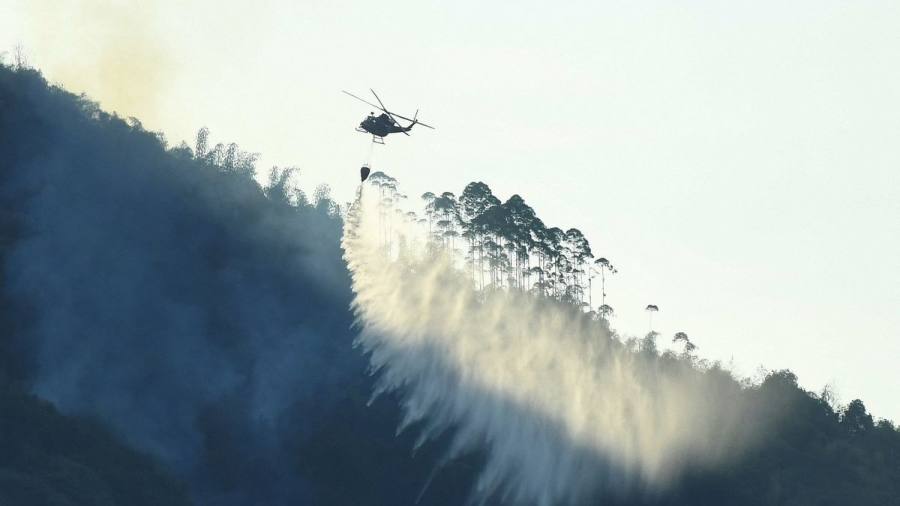 More than 1,500 people have been evacuated after forest fires struck the municipality of Chongqing in south-west China, which is in the midst of a record heatwave and a devastating drought.

The fires were affecting at least four districts of the municipality, according to authorities, and 5,000 rescue workers had been sent to help. Chongqing, which has a population of over 30mn, is south-west China’s biggest financial centre.

The months-long heatwave sent temperatures toward a high of 43.4C in Chengdu on Sunday and the drought has emptied rivers and dams in neighbouring Hubei and Sichuan provinces, which rely on hydropower.

Officials in Sichuan extended an order for industrial power users, including makers of lithium batteries and solar panels, to suspend their plant operations until at least August 25 to preserve energy.

What to watch in Asia today

Economics: S&P Global and IHS Markit publish data on the strength of the manufacturing sector in Japan and other regions, as supply chain disruptions continue to stifle production around the world.

Corporate results: Chinese ecommerce group JD.com publishes figures for the second quarter, four months after founder Richard Liu resigned as chief executive and became the latest entrepreneur to step down amid Beijing’s campaign to rein in the tech industry. Social media app Kuaishou, a competitor to TikTok in China, also releases results for the quarter to June.

Markets: Asian equities recorded a mixed opening, with futures rising for Hong Kong’s Hang Seng index but falling for Japan’s Topix and Australia’s ASX. Globally, stocks dropped on Monday amid concerns that central bank officials will adopt a hawkish tone at a summit this week, with US equities suffering their biggest decline in two months.

Elon Musk has subpoenaed Twitter co-founder Jack Dorsey for his communications with the social media site’s executives regarding the prevalence of fake or bot accounts on the platform.

The filing on Monday comes as part of Musk’s legal fight to back out of his $44bn deal to buy the company, primarily over what the Tesla chief executive contends was a misrepresentation over the number of Twitter’s active users.

Dorsey, who stepped down as Twitter chief executive in November, was an enthusiastic backer of Musk’s dramatic takeover offer. In April he described Musk as “the singular solution I trust” to solve Twitter’s problems, adding: “I trust his mission to extend the light of consciousness.”

Monday’s filing asks for any communication between Dorsey and his executives since January 1 2019 that may be relevant to “the impact or effect of false or spam accounts on Twitter’s business and operations”.

The latest demand follows efforts by both sides of the legal dispute to gather morsels of information from dozens of people regarding the deal as the matter heads to a trial in the Delaware Court of Chancery. It is expected to begin on October 17 and last five days.

Ian Johnston in London and Nicholas Megaw in New York

US stocks suffered their biggest decline in two months on Monday, with tech shares falling sharply on worries about the gloomy economic outlook and concerns that members of the Federal Reserve will adopt a hawkish tone at a symposium this week.

Wall Street’s benchmark S&P 500 index slid 2.1 per cent, its most severe one-day fall since mid-June. There were declines across every sector, but technology stocks and cyclical consumer groups including Amazon and Tesla were the worst hit. The tech-dominated Nasdaq Composite index fell 2.5 per cent.

Tech stocks that promise long-term growth are seen as particularly vulnerable to rising interest rates because higher rates reduce the relative value of earnings far in the future.

Although Monday’s stock market declines appeared to contrast with a strong rally so far in the third quarter, investors have warned that the earlier gains were not evidence of an increase in investor optimism after a dreadful start to the year.

Samer Al-Atrush in Riyadh and David Sheppard in London

Saudi Arabia has warned it could choose to lead the Opec+ group in cutting oil production if prices keep falling, arguing that prices have become disconnected from the fundamentals of the market.

Prince Abdulaziz bin Salman, the Saudi energy minister, told Bloomberg that Opec+ had “the capability to reduce output at any time and in different ways”, with crude prices having fallen from nearly $120 a barrel in June to about $95 a barrel.

“The paper oil market has fallen into a vicious negative cycle consisting of severe weakness in liquidity and fluctuations in the market which act to constrain the main functions of the market . . . (to) effectively reach a correct and appropriate price,” Prince Abdulaziz said, according to a transcript published in Arabic by the official Saudi news agency.

“The negative cycle increases with baseless allegations that there is a drop in demand, and repeated news of a large amount of supply to market. The paper and physical markets have become increasingly separated.”

Many countries have welcomed falling oil prices, including the US, where President Joe Biden has made them a pillar of his campaign ahead of midterm elections in November. Biden travelled to Saudi Arabia earlier this summer, in part to push Saudi Arabia to increase oil production to help keep prices under control following Russia’s invasion of Ukraine.

Prince Abdulaziz’s comments suggest Saudi Arabia is unhappy with the latest drop in oil prices. It has long argued that increased investment in the energy sector is needed to help meet rising global demand and has warned that there is little spare capacity available should Russian supplies fall sharply under western sanctions.