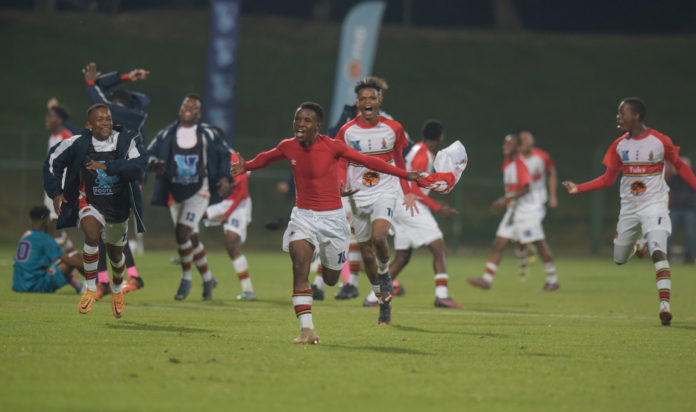 It was another action-packed round of Varsity Football, with fans flocking to the stands. The Red Army of TUT climbed to the top of the log, while record champions UP Tuks collected their first win of the 2022 edition, beating previous log leaders NWU. Meanwhile, 2021 winners UJ have continued their upward trend and beat the Educated Footballers in the Johannesburg derby.

The University of KwaZulu-Natal were searching for their first win in this year’s Varsity Football tournament when they welcomed unbeaten Tshwane University of Technology at the Howard College Rugby Stadium. But it wasn’t to be as the visitors grabbed the lead in the 18th minute after Tshepiso Mnisi found the back of the net following a scramble in the 18-yard box. Mnisi completed his brace after scoring with a right-footed shot from in the inside the box in the 58th minute. The home side pulled one back in the 65the minute through a penalty converted by Njabulo Mkhize. However, a big error from UKZN defence left Tshiamo Mahome one-on-pone with the Impi’s last defender and the TUT man sliced the ball with his left foot into the corner of the net in minute 71.

Wits University had a mammoth task at hand when they hosted the defending champions, University of Johannesburg in a much-expected Johannesburg derbyat Wits Stadium on Thursday. UJ like a house on fire after a ball from the right hand side was slotted home by Philane Masondo from close range in the fourth minute. The remained tight for large parts but Orange Army doubled their lead in the 78th when Thulani Zandamela put his name on the scoresheet with a powerful shot after being set up by Masondo. The victory didn’t just saw UJ claim the bragging rights but also climbed to six points on the log, while Wits remained with just one point.

Struggling record champions University of Pretoria already found themselves under pressure in their game against log leaders from North West University Mahikeng at Tuks Stadium. The game took a long time to get going but the final 15 minutes were worth the wait. Tuks took the lead in the 75th minute through Paballo Mamabolo. NWU thought they had rescued a point when Bongani Taaibosch scored with a header following a corner-kick. However, the record champions managed to score a much-celebrated injury time winner following a blunder by the NWU defence the resulted in an own goal by goalkeeper Jevuka Luzuko. It was Tuks’ first win of this year’s Varsity Football tournament, while NWU dropped points for a first time.

The University of Free State hosted the Vaal University of Technology in the early kick off of round three of Varsity Football at Xerox Shimla Park. The game between fourth-placed Kovsies and third-placed VUT was a tight affair for large parts but came to life in the second stanza. The home side drew first blood in the 64th minute when Sello Diphoko finished off a fine solo run with a powerful shot from outside the box that hit the inside of the post before going into the back of the net. Just four minutes later Kovsies doubled their lead, with Diphoko scoring a rebound from close range after the initial shot was saved by the VUT goalkeeper. However, VUT pulled one back in the 74th minute when substitute Manuel Makae benefited from several errors in the Kovsies defence.