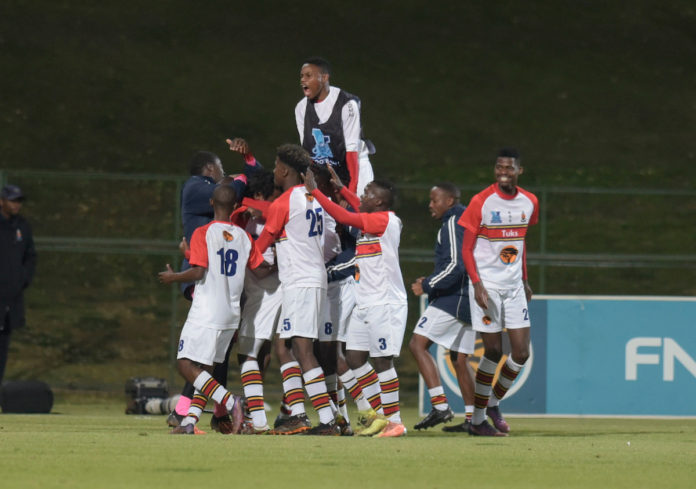 It was another action-packed round of Varsity Football, as 11 goals were scored across the four matches on Thursday evening. The University of Pretoria have won a heated Tshwane derby with the last kick of the game, collecting their third successive win and handing the Tshwane University of Technology their first defeat of the 2022 Varsity Football tournament. Meanwhile, defending champions, University of Johannesburg beat the North West University, who lost their lead on the log.

Record Varsity Football winners were hosting local rivals TUT in the Tshwane derby at the Tuks Stadium. The match was a fairly even in the first 45 minutes and went goalless into the break. Tuks eventually took the lead in minute 56 when Ntokozo Madela was once again on the scoresheet to hand his side the much-celebrated lead. The game remained tight until the final minutes when it came to life in injury time. First the red Machine equalised in the 93rd minute via a screamer by Surprise Khoza but the Stripe Generation immediately hit back just second later when substitute Marco Giuricich was at the end of a pin-point cross to make it 2-1 for the home side, much the enjoyment of the home crowd. Tuks brought home the three points, making it back-to-back-to-back wins, while handing the Red Machine their first defeat. The three points saw Tuks climb above TUT on nine points, while the visitors remained on eight.

UJ with statement win over NWU

Defending champions, UJ were hosting current log leaders NWU in a much-anticipated clash at the UJ Stadium. It was a tightly contested affair for large parts in the first half before Thulani Zandamela – one of the standout players in this year’s Varsity Football edition – scored the opener for UJ from a header following a beautiful cross ball by Thanda Madiba in the 38th minute. The  game remained tight until the last few minutes, with Gerald Ndlovu making it 2-0 for the Orange army after dribbling past two defenders in the 90th minute. However, UJ didn’t end the match with a clean sheet, as NWU scored just a minute later via a header by substitute Adam Fynn. The victory saw UJ climb to 10 points on the log, one point above the Noble Men.

UKZN were hoping to collect their first three points of the 2022 Varsity Football campaign when welcoming UFS Kovsies at the Howard College Rugby Stadium. However, it was the visitors who drew first blood when Boy Rantsoti made no mistake in a one-on-one with the Impi goalkeeper after being played through via long ball from a swift counterattack in the 33rd minute. UKZN tried to push for an equaliser as they continued their improved showing on the pitch. However, Kovsies were able to defend their lead until the final whistle thanks to same strong defending. The victory saw UFS climb to the top of log with 10 points, while UKZN have no chance anymore of making the top four.

The Educated Footballers hosted VUT at Wits Stadium in the early kick-off, with both sides needing the three points to keep their slim top-four hopes alive. The match was a pretty one-sided affair, though, after Wits goalkeeper Phelelani Mavuso had a nightmare match. VUT scored against the run of play in the sixth minute, with Ntokozo Mgidi opening the scoreline. Mgidi completed his brace in the 40th minute with a fine shot from outside the box, which Shapiro should’ve saved. Wits were given a lifeline in the 53rd minute when Bradley Mongwe calmly converted a penalty kick, but their hopes of getting anything out of the match were crushed when Mgidi completed his hat-trick with a long-range free-kick, which slipped through Shapiro’s hands. The victory saw VUT move to seven points on the log, while Wits remained on just two.