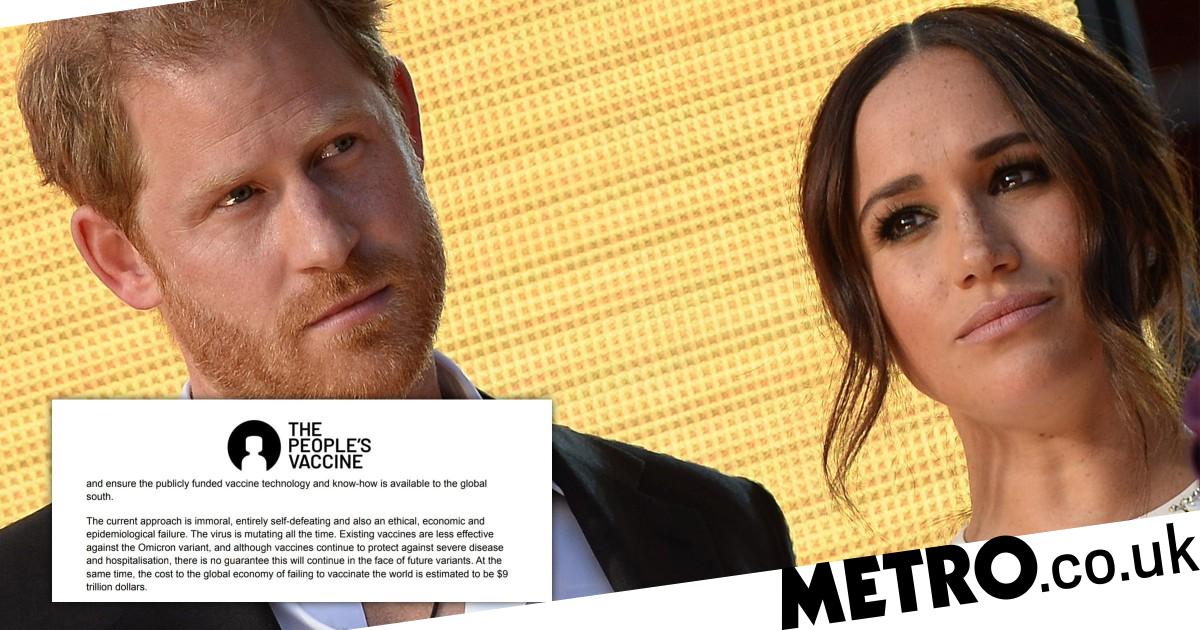 Prince Harry and Meghan have lambasted the UK and other wealthy countries for not lifting intellectual property rules so more Covid vaccines can be distributed.

The Duke and Duchess of Sussex signed an open letter labelling the world’s approach to the pandemic as ‘immoral, entirely self-defeating and also an ethical, economic and epidemiological failure’.

The coalition works to make coronavirus vaccines, tests and treatments ‘freely available to everyone, everywhere’.

The letter was published on Friday to coincide with the second anniversary of the World Health Organization (WHO) declaring Covid had become a pandemic.

It warned world leaders that ‘the pandemic is not over’ but that ‘it is within our grasp to end it’.

It said: ‘Two years since the World Health Organization (WHO) declared Covid-19 a global pandemic – and faced with disturbingly unequal access to Covid-19 vaccines – we urge world leaders to do what is necessary to end this crisis and unite behind a People’s Vaccine.

‘Now we are reuniting, in greater numbers, and with utmost urgency repeating our call for a People’s Vaccine.

‘We appeal to world leaders to end this strategy of counter-productive nationalism and of protecting pharmaceutical monopolies and to finally act with international solidarity.’

The UK has promised to donate 100million coronavirus vaccine doses to low-income countries within the next year.

But the letter claims the European Union, Germany, Switzerland and Britain have blocked ‘the lifting of intellectual property rules’ which would allow for more vaccines to be distributed.

Prince Harry, 37, and Meghan, 40, have spoken out throughout the pandemic regarding global access to vaccines.

In October, they joined the WHO and Save the Children to appeal to G20 leaders to send more vaccines to low-income countries.

In September, they spoke at the Global Citizen Live event in New York to raise awareness of the need for global access to vaccines.

The couple’s Archewell Foundation has also officially partnered with and invested in the People’s Vaccine.

The open letter from the coalition is the latest in tensions between Prince Harry and the UK Government, after he launched a lawsuit against the Home Office over the decision to remove his police protection while in Britain.

A spokesperson for the duke revealed last night that he will not return to the UK to attend his grandfather’s memorial service next month, due to concerns for his security.