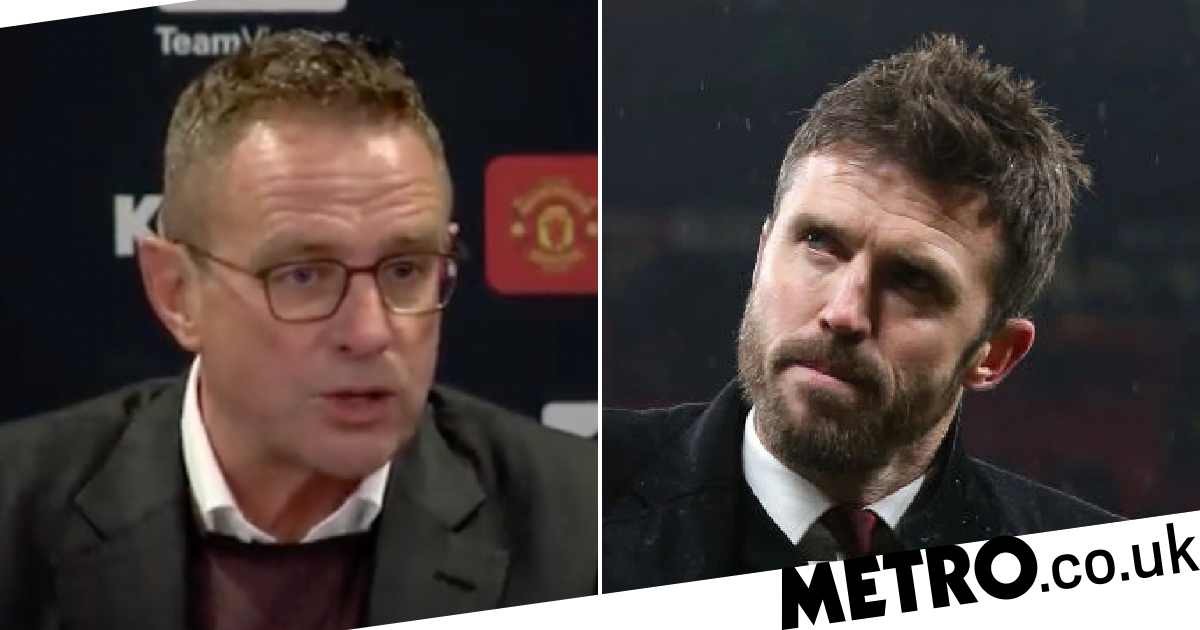 Ralf Rangnick has revealed he held unsuccessful talks to try to convince Michael Carrick to ‘stay on board’ at Manchester United, but was forced to accept his decision to step aside as he ‘needed a break’.

The 63-year-old held his opening press conference as United’s interim head coach this morning and discussed a range of topics including his playing style, Cristiano Ronaldo’s role in his setup and the upcoming January transfer window.

There remains uncertainty over the coaching staff Rangnick will employ for the second half of the campaign after Carrick – who worked closely with Ole Gunnar Solskjaer and had been in charge as caretaker boss – announced his departure in the wake of United’s 3-2 win over Arsenal.

The former England midfielder said it was ‘100 per cent’ his choice to leave following the victory, which Rangnick confirmed as he addressed the media for the first time.

‘I met with Michael and with Kieran [McKenna], but especially with Michael two days ago. I had a long private conversation with him for more than an hour,’ Rangnick told reporters.

‘I was trying to convince him to stay on board, but he had obviously taken that decision weeks ago that he needed a break and a rest after 30 years in professional football.

‘In the end I had to accept that and in a way I can also understand his decision.’

Rangnick hopes to get ‘one or two’ trusted former colleagues on the staff at United, but admitted it may be tricky given many are already contracted to big clubs around Europe.

‘I’m more than happy to work with the current coaching staff because I need their experience and expertise regarding the current squad,’ he added.

‘I will obviously try to find one, two, maybe three people who can join us in the next two weeks, but with the Brexit regulations it’s not that easy.

‘Many of my former colleague, no matter if it’s video analysts or assistant coaches, are in contracts with big clubs so they’re not available right now so we have to be a little bit smart and clever and find the right people.

‘But I hope that we can get them in here in the next one or two weeks, but I cannot tell you any names.’

Rangnick was in the stands at Old Trafford for the Red Devils’ victory over Arsenal and was pleased his new club came away with all three points from the heavyweight clash.

But the German aims to bring greater ‘control’ in games over the coming weeks and months which will help the squad ‘gain confidence’.

‘To gain control on games in the future it’s got to do with playing proactively, no matter if we have the ball ourselves or if the other team is in possession of the ball,’ he went on.

‘It’s about helping the team to play together, it’s about togetherness, it’s about team spirit and we saw it yesterday.

‘If we compare the two halves it was completely different and having had these unique fans behind us, this will help and also help the team to gain confidence and we could see it in the second half.

‘This is obviously not easy and I cannot do that within one or two training sessions, not even in one of two weeks. It’s not about playing pressing or counter-pressing for the pressing kind of sake, but it’s about control. This is the major target.’

Rangnick’s first game at the helm takes place this weekend at home to Crystal Palace.

He takes over the reins from Carrick with United sitting seventh in the table, 12 points adrift of Premier League leaders Chelsea.


MORE : Thomas Partey admits he’s still to get back to his best after Arsenal’s defeat to Manchester United