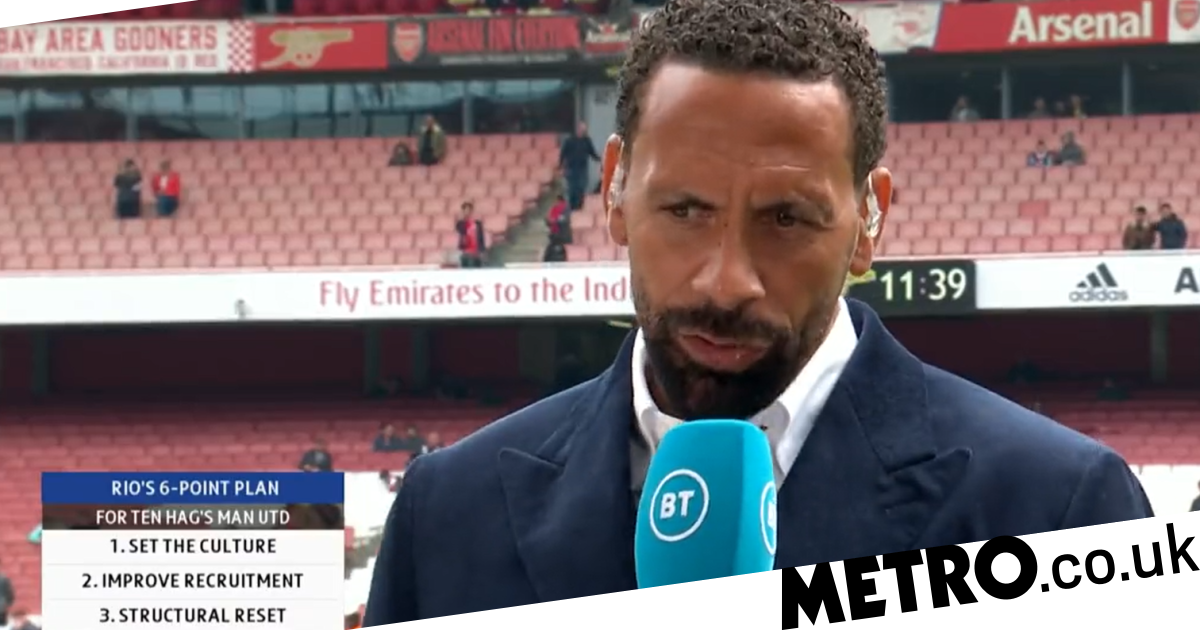 The Dutchman’s appointment was confirmed on Thursday but he won’t start work in earnest until the summer once his commitments with Ajax are fulfilled.

Ten Hag will inherit a fractured dressing room and a squad which is set to lose a number of high-profile and experienced players.

On Friday, interim boss, Ralf Rangnick, whose own future remains a matter of conjecture, revealed that Paul Pogba has already played his final game for the club after suffering an injury at Liverpool in midweek.

Ferdinand, a defensive linchpin during the club’s glory days under Sir Alex Ferguson, has been left dismayed by recent events at Old Trafford and fears Ten Hag will have little chance of succeeding unless he is given time by the senior figures above him.

The former England international is confident Ten Hag will fall victim of the short-termism that has cut short the reigns of Jose Mourinho and Louis van Gaal, but a cultural reset is required to reinstil the sort of discipline that was a hallmark of Ferguson’s tenure.

Ferdinand told BT Sport: ‘These are the six points that a manager can have influence on you can talk about stadiums and training grounds and redevelopment but that’s not where Ten Hag is going to come in and help.

‘You talk about six points and I mention the culture many times over the last couple of months. With that I mean discipline, players made accountable on and off the pitch, you need consequences when things aren’t going right and decisions are made off the pitch. I don’t feel there’s a fear factor for any player if I do something wrong and step out of line or don’t adhere to tactical strategies.’

Recruitment, too, will require a near total overhaul given the money which has been wasted over the course of the last decade on players who have failed to live up to expectations following high-profile and expensive moves.

Ferdinand added: ‘Recruitment is obvious. You can see the players that have come into the club, how many have improved? It comes down to coaching as well but how many have come in and thought they are a perfect match, I haven’t seen enough of that!

As a manager you have to say if you have players who don’t run around, that’s not their best asset you have to get them doing that. Because at Man City Bernardo Silva or Thiago at Liverpool they are players that don’t shy away from hard work they get around that pitch put pressure on people.’

As well as revealing Pogba had effectively played his last game for the club, Rangick also sent a warning to his successor ahead of Saturday’s must-win match at Arsenal, insisting the club required ‘open-heart surgery’ in order to catch the likes of Manchester City and Liverpool.

‘Rangick has been here and he’s played his role,’ Ferdinand added. ‘On the one hand he’s been honest and that’s refreshing to see but it’s got to a point where is he alleviating himself from having his fingerprints over such a period where the amount of wins you expect them to get haven’t materialised.

‘I’m seeing statements that are being made now, when you’ve got a manager you have to have someone speaking on the basis of the club. Yes there is a lot of work to do but I think open-heart surgery is a bit of a step too far.

‘There needs to be a clear playing style because coming to a football club and not understanding how your team is going to play is criminal.

‘As a manager you have to say if you have players who don’t run around, that’s not their best asset you have to get them doing that. Because at Man City Bernardo Silva or Thiago at Liverpool they are players that don’t shy away from hard work they get around that pitch put pressure on people.’

Ten Hag will at least benefit from the work that has been done at academy level with the likes of Anthony Elanga, Hannibal Mejbri and Shola Shoretire already having graduated to first team level.

Whether United qualify for European competition or not next season, Ferdinand believes it is vital that the careers of those exciting youngsters are nurtured carefully.

He said: ‘The message has to be from above that you have time and patience we believe in youth. History of this club tells you that we play kids whether in Europe or not. Sir Alex Ferguson, I hate going back but it’s a fact, all through those years they are in Europe to win things and young players are introduced, so don’t tell me it can’t happen, it can. But you need time.

‘The manager needs to be given time by the people who run the club.

‘I’m confident the work is being done behind the scenes and I’m confident the manager is going to get time and there’s a lot of calculated data compiled to allow the person who comes in, which is Ten Hag, to go out there and do the job. He will have a say in the recruitment which is vital because you can’t have the club buying players and the manager doesn’t know about it. Recruitment has let the club down over the last 10 years.’