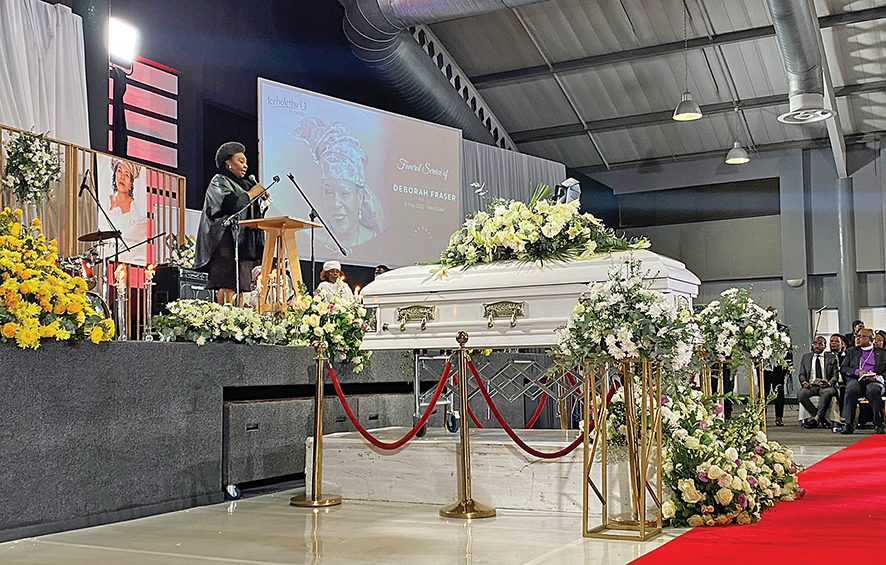 Fraser, who was a household name, began her career in 1985 as a backing singer, and recorded her own album in 2000, titled Abanye Bayombona.

She was laid to rest in Hillcrest, west of Durban yesterday.

Artists such as Sipho Makhabane, Benjamin Dube, Babo, Sgwili, Andile KaMajola and Nomcebo Zikode-Fraser, were among the artists who paid their last respects. High-profile personalities such as Nomusa Dube Ncube, Joy Mbewana, Zwelinzima Vavi, Zanele Mbokazi and many more also attended the service.

World-renowned music icon Yvonne Chaka Chaka thanked Fraser’s family for “giving us a superstar” and promised not to abandon her children.

Chaka Chaka said Fraser’s music would live on, even though artists are often not appreciated in this country.

“To the music industry, Deborah has done a lot. It is just a pity that sometimes our government does not appreciate or support a lot of creatives. It is our job to band together,” she said.

Music producer Sipho Mbele described Fraser as an amazing person who loved her job and did it with passion. Mbele made a call for people to continue supporting Fraser: “Keep on supporting her by downloading her music to keep her legacy alive.”

Fraser’s son Nkosana said the family was left distraught after the passing of their mother. At the memorial service held in Johannesburg south, Deborah’s record label, Universal Music, said they were supposed to release her new album in March, but didn’t as she was ill.

In the album she features Zikode-Fraser, who is married to her nephew, Selwyn Fraser.

Fraser also recorded a duet with her nephew, Lam Lam.