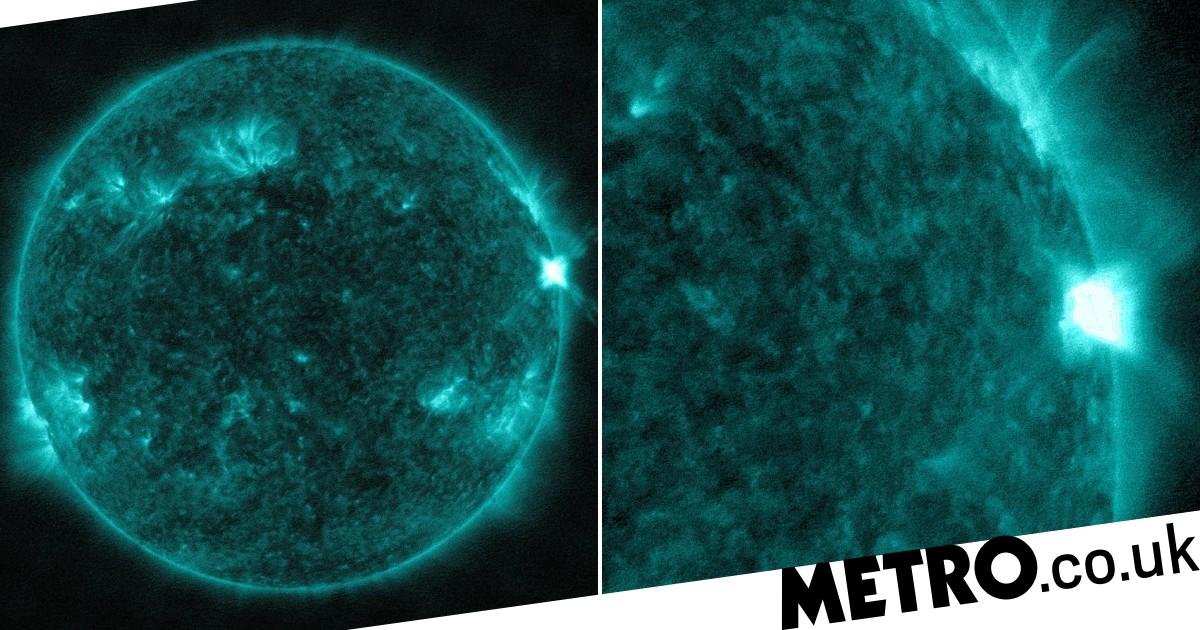 A warning has been issued after the sun threw out its strongest solar flare in half a decade.

A solar flare is an explosion that happens on the sun when energy stored in ‘twisted’ magnetic fields (which can usually be found above sunspots) is released.

Two days ago, an eruption was picked up from a sunspot on the western side of our parent star.

The resulting radioactive energy shot through our solar system at the speed of light and some of it crashed directly into our planet.

Nasa’s Solar Dynamics Observatory monitored the blast as well as resulting radio blackouts for some shortwave and aviation equipment in Asia.

The flare was classified as an X2.2. An ‘X-class’ flare is the strongest category measured by scientists. Higher numbers represent an increase in its power, and this was the strongest recorded since 2017.

No other damage was reported as a result of the flare – but it is continuing evidence of the sun’s transition into an active period of its solar cycle.

That means more energetic flares could be incoming with a greater chance of risk to certain electronic equipment. Large-scale blackouts and damage to satellites can be common side-effects of massive solar flares.

Writing on Spaceweather.com, Dr. Tony Phillips issued the following warning: ‘Active sunspot complex AR2993-94 is still turning toward Earth, however, so the odds of a future hit are increasing.’

Thankfully, the Earth’s magnetosphere stops the radioactive outbursts from solar flares from getting down to ground level and hurting biological life.

But satellites and high-flying aircraft aren’t aways so lucky.

What happens if a solar flare hits Earth?

That depends largely on what size the solar flare is – nothing may happen at all if they are very small, but larger ones could have catastrophic consequences.

The smallest, C-class, are unlikely to make much impact on Earth, medium-sized ones – known as M-class, could cause some low-level damage, while the largest, known as X-Class, could be seriously disruptive.

Solar flares differ from Coronal Mass Ejections (CME), which are a release of plasma and radiation from the sun – although they can sometimes accompany these flares.

A CME is what causes the Northern Lights to appear in the sky.

The most famous Coronal Mass Ejection occurred in 1859, causing a geomagnetic storm called the ‘Carrington Event’ as a pulse of charged particles bombarded Earth’s magnetosphere, and caused telegraph systems across the US and Europe to fail

If this happened today, the results would be devastating – potentially wiping out satellite systems and power grids and causing trillions of pounds worth of damage.


MORE : Northern Lights could light up the skies across the UK tonight


MORE : Nasa spots solar explosion with the potential to cause radio blackouts on Earth