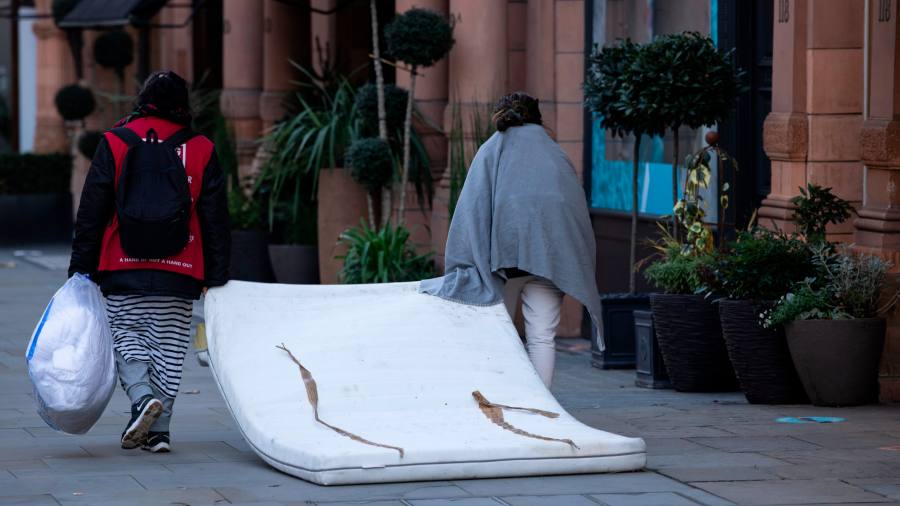 Dozens of UK charities have warned Liz Truss and Rishi Sunak, the Conservative leadership contenders, of a homelessness “precipice” as soaring energy bills combine with record rents to intensify the cost of living crisis.

In a letter on Wednesday, 29 homelessness organisations, including Shelter and Crisis, urged the foreign secretary and former chancellor to honour Tory manifesto commitments to ban so-called “no-fault” evictions and end rough sleeping by 2024.

One of the most common causes of homelessness, no-fault evictions allow landlords to evict tenants without giving a reason.

The letter, which was co-ordinated by Homeless Link, pointed to “inflation rising at the fastest rate for 40 years” as rents “hit record levels and are still rising” because of “a chronic lack of genuinely affordable housing”.

“Now we are at a precipice,” the charities warned, adding: “Without governmental intervention, we fear many more people could be forced into homelessness.”

Since a government moratorium on evictions during the coronavirus pandemic ended in August last year, homelessness has climbed sharply. According to the latest official figures, in the three months to March this year homelessness caused by private landlords selling or reletting their properties was 17 per cent higher compared with the same period in 2019.

Meanwhile, the number of social tenants becoming homeless doubled from the same period in 2021, with government pointing to a “large increase in rent arrears”.

The charities called on the next prime minister to pursue a planned “refresh” of the government’s rough-sleeping strategy and bring forward full legislation from a white paper on renting published this month, which promised to end Section 21 or no-fault evictions.

In north Tyneside in north-east England, consumer charity Citizens Advice said many tenants on low incomes were accruing huge arrears and having to choose between paying rent or soaring energy bills. It added that there had been a rise in people needing help with mortgage debt over the past six weeks.

Jacqui Ramsay, service operations manager, said homelessness was a “time bomb waiting” to go off. “Six to 12 months from now, homelessness is going to go ‘whoosh’,” she said, as she called on the government to reinstate a £20-a-week uplift in universal credit temporarily introduced during the pandemic.

“To stop rising homelessness this year, whoever becomes the next prime minister must get a grip, and fast, by unfreezing housing benefit so people can afford to pay their rent,” she added.

Lisa Nandy, shadow levelling-up secretary, said ministers had been “too distracted with their own scandals and incompetence to get ahead of this crisis and produce a plan for people who are struggling to meet rent and mortgage payments”.

One Truss campaign insider said the Tory leadership frontrunner remained “committed” to the rough-sleeping manifesto pledge, adding that Truss “would look at the best way to achieve this as and when she gets into Downing Street”.

A spokesperson for Sunak’s campaign said that as chancellor he had committed “significant” investment to rough sleeping and affordable housing. “Rishi has been consistent on the need to do more to support the most vulnerable people in our society with the cost of living this winter,” they added.

The Department for Levelling Up, Housing and Communities said rough sleeping was at an eight-year low, pointing to a £65mn fund for vulnerable tenants in arrears. It added that a new bill, the Renters’ Reform Bill, would end Section 21 evictions by making tenancies simpler and more secure.