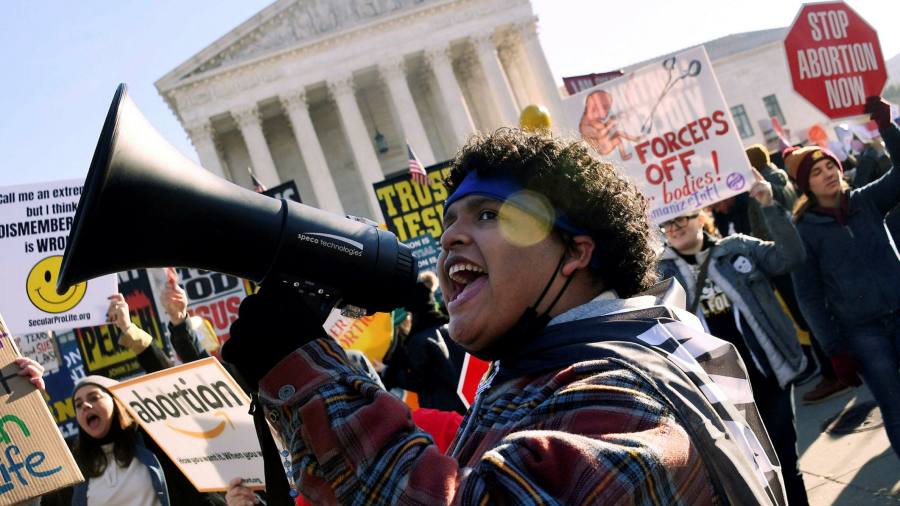 Conservative justices on the US Supreme Court signalled they could be willing to let states place new curbs on abortion, in a landmark case that could alter longstanding legal precedent allowing women to terminate their pregnancies.

America’s highest court on Wednesday heard oral arguments in the biggest challenge to abortion rights in generations, as the state of Mississippi seeks to overturn Roe vs Wade, the 1973 landmark decision that legalised abortion across the country.

At the centre of the case is a 2018 Mississippi law that bans abortions after 15 weeks. The Jackson Women’s Health Organization, the only remaining abortion clinic in the Republican-led state, is seeking to stop the statute.

Lower courts blocked the ban, deeming it unconstitutional. But in May, the Supreme Court agreed to hear Mississippi’s case. A ruling is expected by June 2022, just months before mid-term elections.

Anti-abortion activists have campaigned for years to undo Roe. The Mississippi case is their first opportunity to challenge the longstanding precedent since Amy Coney Barrett and Brett Kavanaugh were selected for the Supreme Court by former president Donald Trump, which has given conservative justices a 6-3 advantage over liberals on the high court.

In his opening remarks, Scott Stewart, Mississippi solicitor-general, said that “when the constitution does not take sides on [an issue], it belongs to the people”.

Kavanaugh seemed sympathetic to Mississippi’s arguments that, since the constitution is neutral on the question of abortion, the Supreme Court could “return to a position of neutrality”, leaving the matter “to the people, to the states”.

Barrett appeared to challenge the lawyer representing the clinic when questioning why “safe haven laws” — which allow women to relinquish their newborn children at specific locations — did not “take care” of the burden the clinic argues is caused by forced parenthood.

John Roberts, the chief justice appointed by former president George W Bush who has become a pivotal swing vote on the divided court, focused his questioning on the concept of “viability”, signalling he could be open to tweaking that rule rather than overturning Roe entirely.

Roe said states could not ban abortions before a foetus is “viable”, or able to survive outside the womb. This viability line is typically deemed to be between 24 and 28 weeks. Mississippi has asked the Supreme Court to reject that rule, describing it as “baseless”.

Julie Rikelman of the Center for Reproductive Rights, who argued on behalf of the Jackson clinic, said there was no line “more principled than viability” since it was “objectively verifiable”.

Liberal justices voiced concerns about the court’s public image should it overturn or alter the precedent set in Roe.

“Will this institution survive the stench that this creates in the public perception that the constitution and its reading are just political acts?” asked Sonia Sotomayor, who was appointed by former president Barack Obama.

The increasingly conservative tilt on the high court has emboldened Republican-led states such as Texas, which has passed one of the most restrictive laws in the country banning abortions after six weeks, before many women realise they are pregnant, with no exception for rape or incest. The Supreme Court is considering whether to temporarily block that law while legal challenges proceed.

If the court sides with Mississippi, nearly half of US states would be poised to outlaw abortion under statutes that include “trigger” provisions that automatically come into force if Roe is overturned, according to the CRR.

The case has highlighted the decades-long, deeply polarised debate over abortion rights in the US. Protesters from both sides gathered outside the Supreme Court early on Wednesday morning, with the two rallies divided by a railing.

Carol, a 53-year-old woman who declined to give her last name, said she had flown in from Indiana to be there and “be the voice for the voiceless and to protect human life”, adding: “I’m a Christian and I believe what the Bible says that God knit us together in the womb.”

Olivia Woods from Ohio, a 24-year-old organiser at URGE (Unite for Reproductive & Gender Equity), a reproductive rights organisation focused on young people of colour and the queer community, said overturning Roe would be a “violent act”.

“It would be massive devastation that would hit across the country,” she said.

Public opinion in the US favours the current law, with 70 per cent of American adults, and two-thirds of American Catholics surveyed by Pew in 2019, saying they did not want to see Roe overturned.