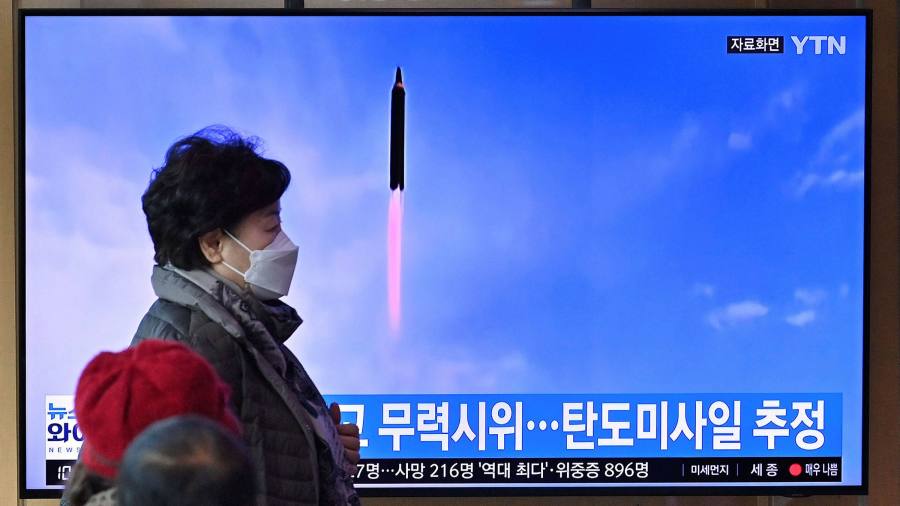 The US has warned of a “serious escalation” in North Korea’s military capabilities, after concluding that two recent missile tests involved “a relatively new” system that could send warheads greater distances than previous launches.

A senior Biden administration official on Thursday told reporters that neither of the missile launches — one on February 26 and the other on March 4 — had demonstrated the ability to travel as far as a standard intercontinental ballistic missile, which could reach the US mainland.

However, US national security officials are still concerned because the launches showed Pyongyang appeared to be testing “elements of the system” before conducting a launch at full range.

The senior Biden administration official called the launches a “brazen violation of multiple United Nations Council resolutions” that would raise tensions and destabilise “the security situation in the region”.

The new concerns about North Korea’s long-range missile capabilities add to the foreign policy challenges faced by the White House as it remains consumed by Russia’s invasion of Ukraine, the largest military offensive in Europe since the second world war.

The public disclosure of the North Korea intelligence appeared to be part of an effort to warn America’s traditional geostrategic rivals against using the Ukraine war as an opportunity to challenge the US while Washington’s national security establishment was focused on rolling back Russia’s invasion.

US officials have vowed not to let their guard down when it comes to security in the Indo-Pacific region during the war in Ukraine.

The Biden administration official said it was important to spotlight North Korea’s intentions in order to help rally the world to confront the threat it posed — echoing Washington’s use of public warnings in the run-up to Moscow’s attack on Ukraine.

“United States decided to reveal this information publicly and share it with other allies and partners because we prioritise the reduction of strategic risk and believe firmly that the international community must speak with a united voice to oppose further developments of such weapons by [North Korea],” the official said.

“We made this assessment in close co-ordination with our allies in [South] Korea and Japan. We have also shared further details of these tests with other allies and partners, including in the United Nations,” the official added.

The official said the US Treasury department would on Friday “announce new actions to help prevent [North Korea] from accessing foreign items and technology that enable it to advance its prohibited weapons programme”.

The official added the US was still willing to engage in talks with North Korea “without preconditions”, but the US president has not moved to arrange the kind of high-profile summit held by his predecessor Donald Trump and North Korean leader Kim Jong Un.