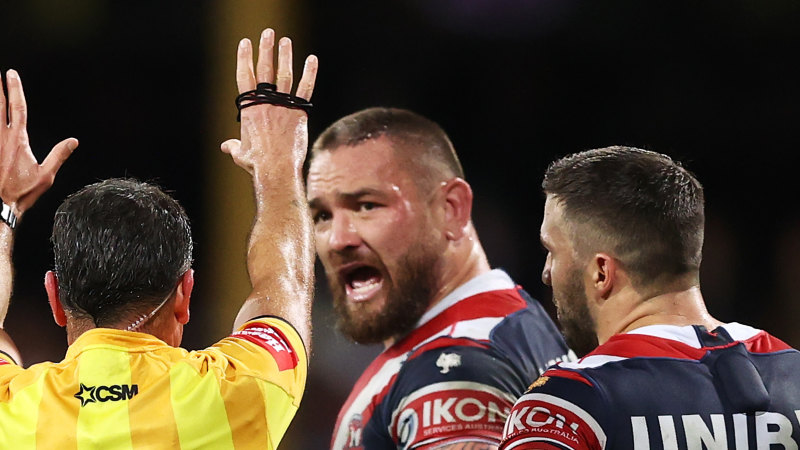 Waerea-Hargreaves was handed a grand one contrary conduct charge on Sunday but avoided suspension, and was instead given a $1,800 fine.

“You can’t speak that way, it wasn’t bad, but he swore … he didn’t swear at him or abuse him [Sutton], but he swore,” Roosters coach Trent Robinson said.

“Jared is also right. Guys hit guys around the chops like that all the time. How many eight-point tries have we seen from guys diving into the corner and getting hit in the head?

“If that’s James Tedesco doing that tackle, he isn’t on report; that’s not a reportable high tackle.”

The Panthers were awarded an eight-point try following Waerea-Hargreaves’s shot, but the result was well and truly over before the blow-up.

Just as last Saturday night’s blockbuster between Penrith and Melbourne fizzed, the showdown with the Roosters was almost decided by half-time as the visitors raced in three tries in the space of 11 minutes.

Jarome Luai bagged a double while Api Koroisau burrowed his way over from dummy-half right on the break.

The only thing that looks like slowing down the Panthers is the Origin period when they will have potentially up to seven players included in the NSW 22-man squad next Sunday.

Co-captains Nathan Cleary and Isaah Yeo will be there, as will Luai, Brian To’o and Liam Martin, plus Koroisau and Stephen Crichton.

The rejuvenated North Queensland Cowboys will head to BlueBet Stadium next Friday in what will be the perfect Origin warm-up for some of the Panthers’ NSW representatives.

One of the few highlights for the Roosters was teen winger Joseph Suaalii putting a giant shot on Viliame Kikau, which even caught the Fijian by surprise. Kikau could only smile when he spotted replays of the hit.

As for the likely mass Origin representation, Cleary welcomed it, and saw the benefits of his players being involved in last year’s series.

“I think it helped us last year in the semi-finals, we had a lot of guys who played their first mid-season Origin campaign, and if you get guys who play well on the Origin arena, it will help you down the back end of the year,” Cleary said.

“It’s a challenge, and you would prefer to have the boys around all the time. But it opens the door for other guys, and as a club, it tests our culture and systems. It’s a challenge we look forward to.

Cleary said Crichton had been consistent, and he was a “big-game guy” who will “have a few mates with him if he gets picked”.

Stream the NRL Premiership 2022 live and free on 9Now.