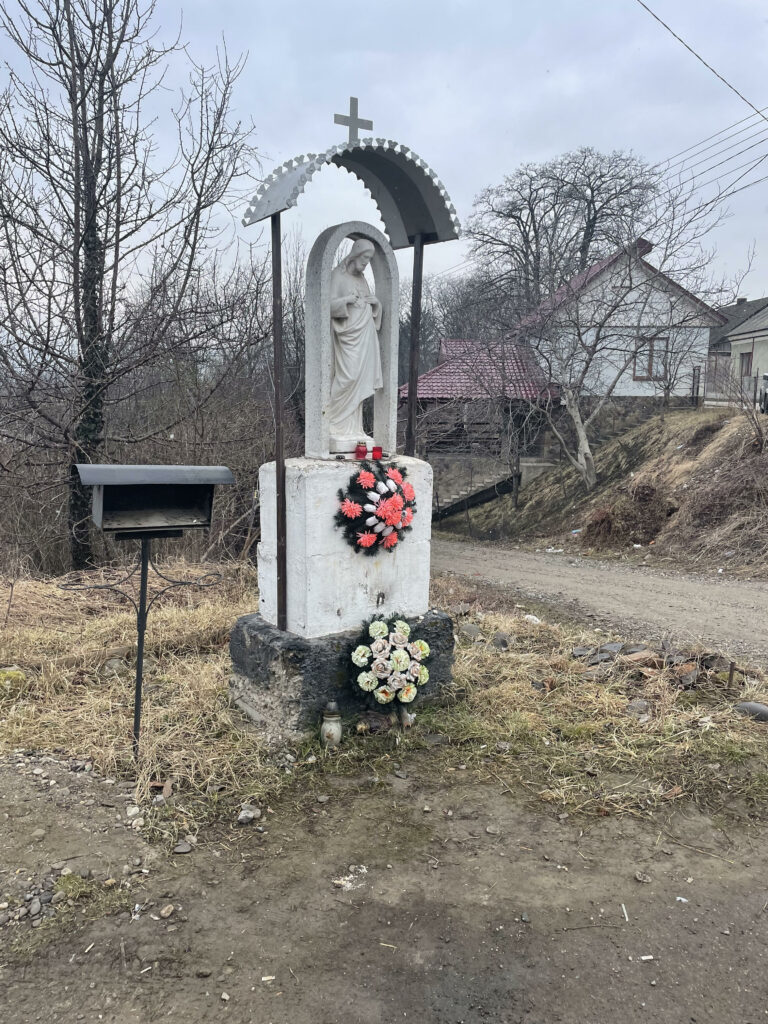 As we drive north through the Carpathian mountains to the northwestern Romanian town of Sighetu Marmației on the Ukraine border we pass through village after village after village. Most of them look a lot like Swiss villages, if those villages had been abandoned for 30 years. But they do have a weird charm. The houses tend to be small L-shaped bungalows, each with a small pointy single storey tower in the angle between the two sides of the house, forming an entrance or lobby type area.

Most of the houses have a well with a charmingly curved little round roof. Mainly because they didn’t have running water here till the late 1990s. We pass numerous ornate little shrines dedicated to local saints. They are intricately carved in the traditional Transylvanian style, decorated with flowers and religious trinkets. Everyone here seems old, I’m told the young people have all moved to the cities. Women in headscarves chat by the side of the road. Labourers in the back of wooden carts smoke while holding pitchforks. Pitchforks are big here.

My driver, Luciano, talks loudly and at length about the crisis to the north. His chief concern is Moldova. I was not aware that the Republic of Moldova is (like the Ukraine) governed by a firmly pro-Western party now.

The pro-Russian government of Dodon lost power in 2020 and was replaced by that of Moldova’s first female head of state — Maia Sandu. Luciano worries that Moldova will be Russia’s next victim, and that Moldova’s relationship with Romania is so close that Romania could easily be sucked into the conflict. He is perhaps not wrong to worry that a Nato nation being dragged into a conflict with Russia could be a very dangerous thing indeed.

The similarities between the Moldova situation and that in the Ukraine are alarmingly similar. The Moldovan government has lost control of Transnistria, a Russian-backed separatist region located in the narrow strip of land between the river Dniester and the Moldovan–Ukrainian border that is internationally recognised as part of Moldova, and President Vladimir Putin may very likely use that as a pretext for invasion.

When I speak to Callum, an academic who I meet that evening, he confirms this. “[Alexander] Lukashenko the leader of Belarus is such an idiot,” he tells me, “Yesterday when he showed the press a map of planned troop movements into the Ukraine, he used some kind of planning map that also showed troop movements into Moldova.”

I’m shocked. Could this dreadful situation really expand so fast? Although it would make sense for Putin to invade Ukraine first and then Moldova, because the seizure of Moldova would have given the more powerful Ukraine notice of his intentions. Doing things the opposite way round would leave Moldova isolated and weak. It all makes terrible sense. One even starts to wonder if the 2020 Moldova election wasn’t the trigger for all this, convincing Putin that all of the ex-Soviet Eastern European states were headed into the glamorous embrace of the European Union.

Transnistria is also known (although only by themselves) as the Pridnestrovian Moldavian Republic, and is not recognized by anyone — even Russia. Although that could very well change, especially because there are already Russian troops stationed there on the pretext of guarding an enormous Soviet-era cache of weapons. Moldova has repeatedly lobbied to have those weapons moved, but Russia has been reluctant to do so. Perhaps because moving them would mean moving the soldiers who guard them?

Occupying Moldova would give Putin control over the entire north coast of the Black Sea, giving him something he really, really wants — an empire. Although quite a small one. But the addition of Georgia might change that. Right now it seems that any Eastern European nation which isn’t part of Nato is at real risk as Putin sees himself more and more as a shirtless reincarnation of Peter the Great.