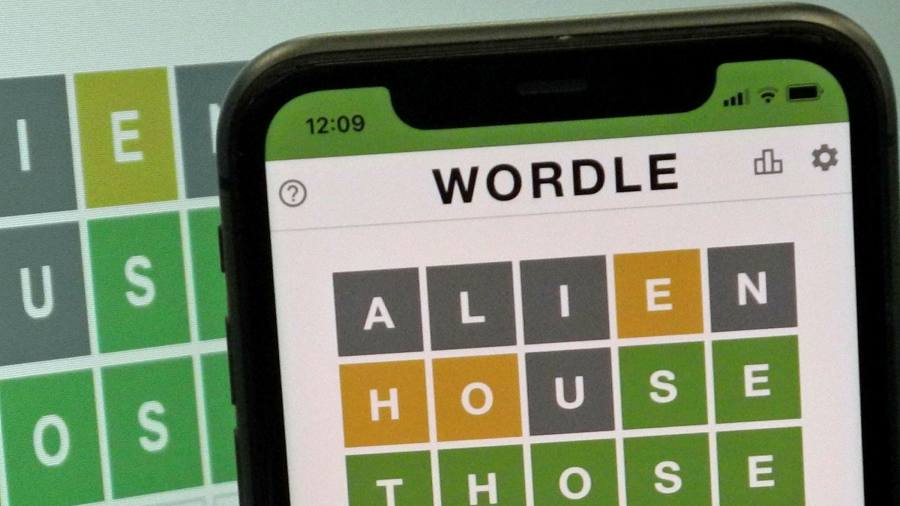 It is a testament to the addictive quality of Wordle that when the five-letter word game was acquired by the New York Times for a low seven-figure sum this week, it felt like a financial bargain. Any challenge that millions, including me, look forward to tackling each morning is a precious asset.

A brain-teasing puzzle that can be played on a mobile phone, with the results shared on Twitter, does not seem at first glance to be the perfect fit for a news publication that takes both its mission and itself extremely seriously, and has just set a new target of gaining 15mn subscribers by 2027. “We seek the truth and help people understand the world,” it proudly proclaims.

But many customers do not come for “all the news that’s fit to print,” as the NYT promises on its front page. They gather online for puzzles and recipes: its Cooking and Games websites and apps now have more than 2m subscriptions and are adding to the total rapidly — faster than the rate at which subscribers are signing up for its political, economic and general news.

Newspaper journalists have always lived with the painful knowledge that many readers were more devoted to the daily crossword than to our articles. When the internet swept away print advertising, it undid the bundle of news, comment, games and curiosities for good at many papers.

That bundle has returned online at the NYT. Its main crossword first appeared in 1942, but it has been adding puzzles since 2014 as part of its digital subscription efforts. The mini crossword fits nicely on a phone, and was played 245mn times last year, a lesson absorbed by Josh Wardle, the inventor of Wordle, for its design.

Then there is home cooking. The NYT started to print recipes in the 1850s and one 21st-century reader wrote fondly of repeatedly cooking a 1967 recipe for Veal Chops Beau Séjour. “I’m still using the original copy from the paper, now deep yellow with age, fragile, held together by Scotch tape . . . this favourite dinner, I think, has contributed to the longevity of our marriage.”

So it is not surprising that the NYT has attracted so many $40 a year subscribers to its cooking site, which has a database of 21,000 recipes, adding 700 in 2021 alone. The most popular recipe last year was Old-Fashioned Beef Stew from 1994 by Molly O’Neill, which was viewed 5.6m times; O’Neill died in 2019, but her work lives on.

Mark Thompson, former chief executive of the NYT, observes that coverage of many leisure topics, from cooking to theatre and book reviews, was originally added to hard news by newspapers because they attracted advertising. But “print ads going away does not mean that the activities have lost their interest to readers”.

I would go further. It is not much fun to read a lot of news these days, and the partisan slanging matches surrounding it on social media do not help. Recipes and puzzles used to lighten the austerity of the print Grey Lady, as the NYT was known; now they also offer solace in the age of online angst.

Wordle is ingenious in this regard. When I wandered over to the FT news desk this week, the editors were keenly engaged in comparing their Wordle scores from earlier that morning. The game is not too difficult — it is rare not to be able to guess the answer within six attempts — yet it gives its players the warm feeling of having met an intellectual challenge.

The puzzle is also expertly constructed to encourage online sharing and good-natured rivalry. Little is so tempting on Twitter as being able to appear helpful while boasting, a trick that Wardle built in by letting players display their results with blank green, orange and black squares (green for the right letter in the right place, orange for a correct one in the wrong square).

Many of the NYT’s articles are about the US and of secondary interest to global readers. Wordle and its other puzzles (and indeed recipes) translate easily across borders, at least for the 135m English-speaking people it now targets. The closest thing to a Wordle culture war broke out in January over its American, rather than British, spelling of the answer “favor”.

It has not put the Brits off. Richard Moore, head of the Secret Intelligence Service, tweeted this week that he was “thinking of unfollowing those who post their Wordle results”, and the cyber agency GCHQ replied “Sorry” in green letters. When an outfit that played a key role in cracking the Enigma code in the second world war jokes that it can solve a word puzzle, it must be viral.

This raises the question of whether the NYT will keep Wordle free or fold it within its digital subscriptions, which it introduced for news in 2011 and which brought in revenues of $774mn last year. It offers some puzzles free but was this week cagey about Wordle’s fate, promising only that it would be free “at the time it moves”.

Whatever Wordle’s new owner decides, today’s internet excitement will one day fade and it will turn into another reader staple, like the crossword and an old recipe for beef stew. But here is a five-letter word that they all make: money.