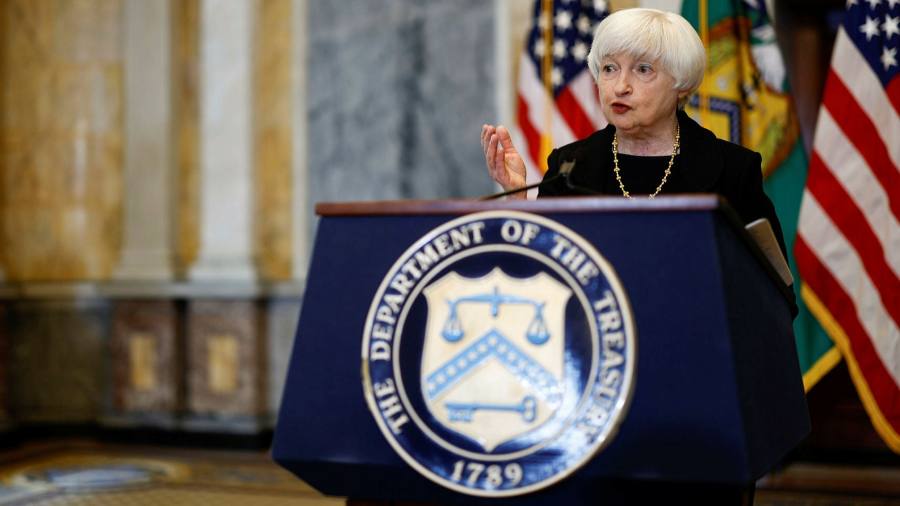 Janet Yellen, the US treasury secretary, urged Europe to be “careful” about imposing a complete ban on Russian energy imports, warning of the potential harm such a move could inflict on the global economy.

“Medium term, Europe clearly needs to reduce its dependence on Russia with respect to energy, but we need to be careful when we think about a complete European ban on say, oil imports,” Yellen said during a press conference in Washington DC on Thursday.

The US treasury secretary said an immediate ban by the EU would “clearly raise global oil prices” and “would have a damaging impact on Europe and other parts of the world”. Yellen added that, “counter-intuitively”, a total embargo may not have such a negative impact on Moscow’s finances, with Russia benefiting from higher prices.

The focus of western allies should instead be on trying to reduce “proceeds from sales of oil and gas” for Russia. “If we could figure out a way to do that, without harming the entire globe through higher energy prices that would be ideal. And that’s a matter that we’re all trying to get through together,” she said.

We’re doing everything we can both bilaterally and through the international financial institutions to address food security risks.

EU members are mulling a ban on Russian oil imports, as six weeks into the invasion of Ukraine evidence of atrocities committed by Russian forces against civilians mounts. A ban on gas imports is more politically and economically difficult, but could be on the table at a later stage.

The US has already imposed a total ban on Russian energy imports, as well as curbs on new US investment in Russia’s energy sector. But it has far less at stake economically than Europe. US officials have consistently said they were not pushing Europe to follow their lead, but instead wanted to help the continent wean itself off Russian energy over time, including by arranging more deliveries of liquefied natural gas from the US.

Yellen spoke on the sidelines of the IMF and World Bank’s spring meetings, which were dominated by the war on Ukraine and its economic impact. Yellen and some of her western counterparts walked out of a G20 gathering on Wednesday in protest at Russia’s presence in the group. “It simply cannot be business as usual for Russia in terms of its participation in our global forums,” she said.

Yellen also rang alarm about the danger of rising prices for both food and fertiliser, saying they could lead to “ more people going hungry, further exacerbate inflation and harm government fiscal and external positions.”

“We’re doing everything we can both bilaterally and through the international financial institutions to address food security risks,” she said, adding that more specific details of the response would be forthcoming in the next few weeks.

Yellen said the US was committed to providing Kyiv with an additional $500mn in economic aid on top of $500mn already pledged by US president Joe Biden last month. She also said the US was considering funding some of Ukraine’s reconstruction with around $300bn-worth of Russian central bank assets, which were frozen by the US and its allies at the start of the war. Such a move may require legislation, however.

“We would carefully need to think through the consequences . . . before we’re taking [this step] I wouldn’t want to do so lightly,” Yellen said. “ It’s something that I think our coalition and partners would need to feel comfortable with and be supportive of.”